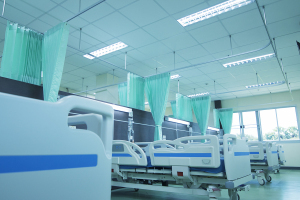 Police were tipped off to the scam through a complaint sent from the brother of a patient who was told it would cost him $20,783 (82,000 soles) for an ICU bed and treatment at the hospital, according to Reuters.

Guillermo Almenara Irigoyen public hospital is administered by the EsSalud social security system in Peru and offers free care, but has a waiting list for 80 ICU beds. This had not boded well for the Andean nation, which tripled its official death count from the virus in late May and currently leads the world in deaths per 100,000 inhabitants from the disease.

In addition, the near collapse of its public health system drove patients early in the pandemic to pay large sums of money to private clinics. While this trend has boosted ICU bed availability to nearly 3,000, compared to hundreds in March 2020, demand for beds is still high. The country earlier this year experienced another scandal when top officials were accused of receiving preferential VIP vaccinations. The allegations led to the resignation of the country’s health and foreign ministers, reported Reuters.

Around 10 million vaccine doses have been administered within the population of nearly 33 million people, according to Sky News. To help increase these numbers, a hospital in Alabama announced this month plans to send a team of more than 20 volunteers to do immunizations in Peru, reported CBS42.

“Our plan is to travel to Peru in mid-August, establish processes and protocols for safe and efficient vaccine distribution in the region with a goal of providing 5,000 doses to the people of Peru,” said Natalie Fox, assistant administrator and chief nursing officer for USA Health Physicians Group.

Other scams around the virus have also been seen in other countries. In India, beds have been allocated to COVID-19 patients in exchange for bribes, while 800 patients in Uganda were duped into buying phony COVID-19 vaccine shots that turned out to just be jabs of water, reported RT News.

Former union leader and leftist teacher Pedro Castillo, who was declared this week as Peru’s president-elect following its elections, has promised to improve the country’s health system, which includes investing mining revenues into it, and to provide free vaccines to all Peruvians (though he has not elaborated how he plans to do this), according to the Associated Press. He is due to be sworn in officially on July 28.