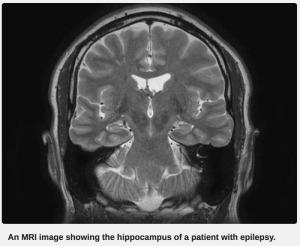 Researchers led by the University of Alabama (UAB) at Birmingham, along with colleagues at Auburn University, will work to do more with less, to help people with epilepsy. The team has devised a way to enhance lower resolution 3T MR studies to a level of clarity achieved by 7T MRI machines, which are scarcer, more expensive to operate and more difficult to use.

"Ever since we got our first clinical 3T scanner, I observed that in some scans we could see the internal architecture of the hippocampus with exceptional clarity, while in other scans there was just a blur," Dr. Lawrence Ver Hoef, principal investigator and associate professor in the UAB Division of Epilepsy in the Department of Neurology, told HCB News.

He stressed that there is much variability in clarity from study to study using the T3 MR, making it very difficult to be confident that an imaging abnormality resulted from a deviation in the brain structure or a limitation of the imaging technique. This issue can be remedied by using a more powerful 7T MRI machine.

But there are 7T access barriers for physicians and patients. According to UAB, 3T machines are common on their campus and across the country. However, there is only one 7T machine in the state (at Auburn University) and less than 20 in North America. The 7T machines are also more expensive to operate and more difficult to use.

"The hippocampus in particular is a frequent locus for seizures, and it is a most difficult area to image with fine detail,” Ver Hoef said. “Diagnosis is difficult, if not impossible, without clear images.”

The $2.4 million grant from the National Institutes of Health builds on earlier research that Ver Hoef led to develop a 3T MR technique that would clearly and consistently depict hippocampal internal architecture in normal individuals.

"We completed that project a couple of years ago with excellent results, and now are applying this technique using state-of-the-art scanners in this next phase of research with four goals," explained Ver Hoef.

The goals are: tweaking 3T images to get the clarity of 7T images; determining if blurring on images is a biomarker for significant disease; comparing brain tissue samples resected from epilepsy patients with the MR information; and to explore if turning certain genes on and off affects epilepsy.

He said the research might offer a surgical option from seizures for up to 85 percent of epilepsy patients, compared to only three to six percent who receive such treatment under current protocols.

"If our imaging technique is proven to detect hippocampal abnormalities with greater sensitivity and precision - as we expect it will be - we will improve our ability to identify the seizure focus and identify patients who will be excellent candidates for epilepsy surgery," said Ver Hoef.