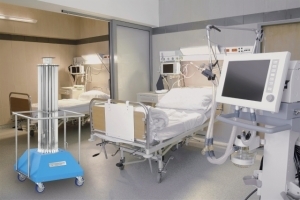 Hospital bacteria lurk unseen between cracks and under tables. The infections they cause kill an estimated 99,000 people annually. And they’re becoming more and more drug-resistant.

While these are not the horror movie viruses that spread rapidly around the globe and turn humans into zombies, hospital acquired infections are still a very real and very expensive threat to deal with, costing health care more than $30 billion annually.

Diligent hand-washing and methodical mopping go a long way, but now, facilities are looking for more formidable measures to take down dangerous bacteria like MRSA, VRE and C. Difficile.

Two high-tech solutions growing in popularity are UV light disinfection systems and hydrogen vapor systems. Both are “no touch” machines, and the companies behind the technologies boast that they can reach the contaminated spots traditional cleaning misses. So far, the few clinical studies carried out using the systems suggest as much, and more information should be delivered in the near future.

Currently, around 4 percent of hospitals have invested in portable UV light disinfection systems, according to Charlie Whelan, Frost & Sullivan healthcare director. He predicts that number will triple over the next couple of years.

“They’re heavy, they’re expensive, and hospitals have been relatively slow to adopt them, but I think long term they will be much more commonplace,” says Whelan.

Zap happy
UV light has been used in disinfection for a hundred years, but its portable incarnation only appeared in the last decade. The exact way the devices work varies from company to company, but basically, the systems use short-wavelength ultraviolet radiation UV-C, a wavelength that does not reach Earth from the sun, to zap microorganisms’ DNA. It’s especially effective on the troublesome bacteria C. Difficile, a spore that forms a protective shell that protects it from alcohol-based cleaners.

“C. Difficile is the most difficult,” says Mark Stibich, president of UV light disinfection company Xenex. “It’s a little bit adhesive, too, so it can stick on a tray table or phone.”

The company reports that Cooley Dickinson Hospital in Northampton, Mass. Experienced a 53 percent reduction in hospital cquired infection rates when the machine was used.

“Other organisms are more susceptible to disinfections, so for those, using Xenex is more a matter of thoroughness in the room,” says Stibich.

Thoroughness is the most important benefit the systems boast, as that’s where many traditional cleaning programs may fall short.
1(current)
2
3
4