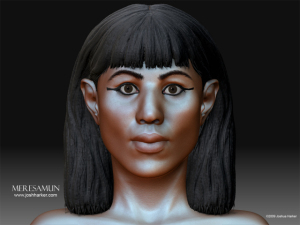 Chicago Artist Joshua Harker
used a digital version
of traditional forensic
reconstruction to create this
image of the face of
the mummy Meresamun
Photo credit:
Joshua Harker for
University of Chicago
Thanks to the skills of artists who work on cold case investigations, people have a chance to see what the University of Chicago's mummy, Meresamun, may have looked like in real life.

A Chicago forensic artist and a police artist in Maryland prepared the images, which show an engaging woman in her late 20s as she would have looked in 800 B.C. Both artists, though working independently, produced strikingly similar images.

Dr. Michael Vannier, Professor of Radiology, began the process of restoring the mummy's facial features with two exhaustive CT examinations of Meresamun in 2008 at the University of Chicago Medical Center.

"A huge number of CT scans of the skull were used to create a 3-D digital model of Meresamun's skull," said Emily Teeter, Research Associate at the Oriental Institute and curator of a museum exhibition about the mummy. "Those files were given to forensic artists who use methods employed in cold case investigations where skeletal remains need to be identified."

The Oriental Institute wanted to compare multiple reconstructions, in order to obtain a trustworthy image of Meresamun's face. Both a digital version of the traditional forensic reconstruction and a missing person-type sketch were submitted.

In the traditional forensic method, layers of fat, muscle and flesh are built up upon the skull. Starting with a three-dimensional image of the skull created from multiple CT scans, Chicago artist Joshua Harker used a technique known as the Gatliff-Snow American Tissue Depth Marker Method to calculate the contours of the face to digitally recreate Meresamun's appearance.

"The skull is the driving architecture of the face--all the proportions and placements are there, if know how to read it," Harker explained. "Even the shapes of the lips, nose and eyebrows can be determined if you know what to look for." The American Tissue Depth Marker method has been shown to be effective in accurately reconstructing a face, both in identifying victims and as admissible evidence in court. 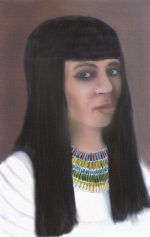