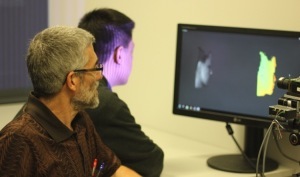 Engineers in the UK have developed a scanner
that can monitor changes in organ shape
and tissue to assist in surgical operations
Engineering researchers at the University of Waterloo in the U.K. are hopeful that a new scanner capable of capturing full-field 3D surface-shape data in real time may prove beneficial to a number of medical disciplines, particularly certain forms of surgery.

Equipped with AI and 3D capabilities in every camera pixel, the technology is expected to provide real-time measurements of an organ or tissue that may have shifted or changed shape from its initial state captured in images prior to operations.

"We've been able to measure the shape of a surface in real-time, whether it's a rigid or deforming surface," said Jonathan Kofman, director of the university's intelligent human-machine systems and 3D imaging laboratories. "If you're looking at tissues, you can measure their surface coordinates while the shape is changing.”

The scanner’s algorithms compute surface shape at the same frame rate as video with a measurement accuracy of approximately 0.1 mm, enabling it to capture images of moving or static objects.

One area of use is brain surgery, a practice that at times requires part of the skull to be removed. This exposes the brain, which changes shape during the operation, rendering preoperative MR images inaccurate. The scanner could provide the surgeon with up-to-date measurements to accurately and safely complete the procedure.

Other notable applications include facial expression analysis and monitoring progress in treating facial deformity conditions where muscles on part of the face become weak or paralyzed. The technology could also be used in robotic surgery, according to Kofman.

"The surgeon operating a robotic system may now see an overlay of the 3D shape of tissues," he said. "They can rotate the shape and look at it from different viewpoints."

In addition to medical applications, the system could be used to assess ground movement such as landslides and mudslides. It can be mounted on a tripod or robot, as well as used as a hand-held.

The team at Waterloo has developed a working prototype of the scanner and is searching for an industry partner to begin the commercialization process.

The findings were published in Optics Express and Optics and Lasers in Engineering.