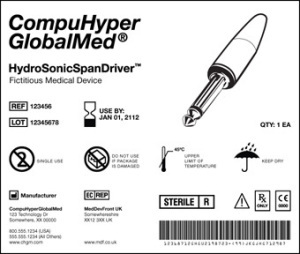 A sample UDI, courtesy of the FDA
Group purchasing organizations want the Food and Drug Administration to hurry up its timeline for implementing new medical device labels and a tracking system that could make recalling products easier and more efficient, while medical device companies fret that the process needs more time.

The groups submitted comments to the FDA this week as the comment period for the new unique device identifier (UDI) proposed regulation ended Wednesday.

Janet Trunzo, a senior executive of regulatory affairs for AdvaMed, a medical device manufacturer trade group, called the project "one of the most extensive and complex regulations to be issued in recent memory."

Based on a recent survey commissioned by the group, AdvaMed estimates UDI implementation could cost manufacturers millions in setting up new production equipment and possibly billions, if they were forced to recall and destroy lots of old devices.

"Because of the cost and impact of this rule for companies we believe it is imperative that FDA get it right the first time," she told reporters on a press call Thursday.

What is the UDI?

The UDI itself is a two-part system, with an alphanumeric code that identifies the device model and production identifier that gives the serial, lot or batch number, and an expiration date. The UDI would appear on device labels and packaging in plain text, intelligible to humans, and a machine readable format, such as a bar code. The other major element is the Global UDI Database, an under-construction public online database that could help the government or providers track products during a recall.

The UDI rule, long championed by patient advocates, has been in the works for several years, but was given a push this summer when Congress passed an FDA user feel renewal bill that included language forcing the FDA to come up with proposed rules by the end of the year. The FDA released those rules in July.

For stakeholders involved in this immense, multi-year project, one of the key issues is when they'll have to comply with the final rules, which are expected next year.

Under its proposed rules, published this summer, FDA put in place a staggered timeline, with higher-risk (Class III) devices expected to have UDI labeling on packaging or devices within one year of the publication of the final rule, intermediate-risk devices (Class II) within three years, and lower-risk (Class I) and unclassified devices in five years.

Some products, like implantable devices and software, require the UDI printed directly on the device itself, in a process called direct marking. This will be required from three to seven years after the final rule is published, with riskier devices getting direct marking first.
1(current)
2
3
4