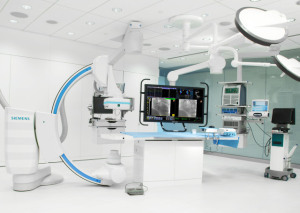 The global positioning system-style technology, called MediGuide, lets doctors track catheters or other devices in a patient's body using recorded fluoroscopic images in place of live X-rays for part of the procedure, potentially cutting the radiation dose to both patient and provider.

"This technology has the potential to minimize that (dose) to less than 10 percent of what we're currently using," Dr. D.J. Lakkireddy, an electrophysiologist at the University of Kansas Hospital, the site of the first U.S. installation, said in a video created by the hospital.

A typical catheter angiography procedure delivers a total effective dose of about 10 millisieverts, or 50 times that of a chest X-ray, according to a 2007 article in the journal Heart. But the dose varies widely: according to material on St. Jude's website, complex interventional fluroscopy procedures, such as cardiac ablation, can expose patients to as much as 70 mSv, equivalent to about 3,500 chest X-rays. (By comparison, the average annual background radiation in the United States is about 3 mSv a year, according to RadiologyInfo.com.)

The St. Jude system has two parts: a magnetic tracker attached to the tip of a catheter or other device inserted into the patients' arteries, and a scanner positioned over the patient that picks up the location of the device and can superimpose it over a recorded fluoroscopic image.

In the video, Lakkireddy said his hospital was using it at first for simpler cases but would later expand to more complex ablation procedures performed at the institution.

You can watch that video here: