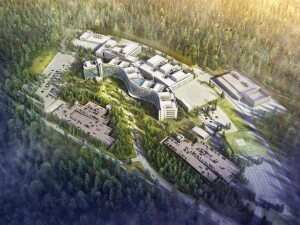 Located next to the Ramstein Air Base, the 985,000 square foot facility will serve more than 200,000 Americans in Europe. It was designed to replace Landstuhl Regional Medical Center, the U.S. military’s largest overseas hospital, which was used during the Cold War and cared for service members in subsequent conflicts in Iraq and Afghanistan.

The new hospital will be known as the Rhine Ordnance Barracks Medical Center and be used to support soldiers deployed in Africa and the Middle East. Initially expected to open in 2022, it will instead begin receiving patients in 2027, according to Stars and Stripes.

“We recognize that this project has taken longer than expected, but we are extremely excited to take the next step forward in providing our servicemembers and their families the modern, world-class medical facility that they deserve — one that will serve this community for decades to come,” said Catherine Bingham, a project official with the U.S. Army Corps of Engineers, Europe District, in a statement.

The hospital is about seven miles from the Landstuhl facility and will have nine operating rooms, 120 exam rooms and up to 93 beds. It is expected to employ about 2,500 people. The 86th Medical Group clinic at Ramstein will be moved into it.

Work on the hospital began in 2014. A number of technical issues had to be resolved before construction could begin, including incorporating substantial changes in anti-terrorism and German energy and sustainability regulations. A completion date was set for 2022, but several delays have pushed it back. The Army Corp of Engineers in 2018 said it would be finished by December 2023 and start admitting patients in the summer of 2024.

Congress cut $100 million from the $200 million request by the Pentagon in 2020. The money was the final funding increment for the project, and no mention has been made on whether it was returned to the project. The German government is contributing about $180 million toward the design and construction management, according to the Defense Health Agency.

A joint venture called Zueblin Gilbane is carrying out construction, with the contract awarded covering the most significant phase of the hospital campus construction. Zueblin, based in Stuttgart, has worked on facilities for the American military in Germany before, while Gilbane, which is based in the U.S., built the Fort Belvoir Community Hospital in Virginia.

About $200 million has already been used to fund recently completed infrastructure.

Radiologists converge in Vienna for the ECR meeting

Potential harm from faulty batteries leads to recall of over 4,000 GE ventilators