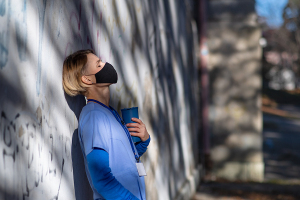 Healthcare workers at the San Diego healthcare system say that through September, they have been subjected to this abuse and threats against them as spikes in COVID, along with new variants like Delta and Omicron frustrate patient attitudes toward progress being made against the virus, the vaccine, and masks, according to CBS8.

"We're also seeing an increase of staff that are being injured because of workplace violence, a 9% increase,” Anthony Roman, the director of support operations who oversees security at Scripps, told the local TV-affiliate.

Scripps Health president and CEO Chris Van Gorder added that some patients who are admitted will “flat-out refuse to wear their masks and [say] that we were making this all up and that COVID was a fantasy.”

The violence is just another stressful challenge for doctors, nurses, EMTs and other staff who have already been overwhelmed for almost two years now by the long nights and early mornings caring for COVID and non-COVID patients. Many are also feeling the brunt of working in a hospital that is filled to capacity but is short-staffed.

And the abuse they face is not isolated to just Scripps Health. Back in October, Cox Medical Center Branson, in Missouri, chose to equip 400 of its physicians, nurses and staff with panic buttons in response to an increase in assaults. It reported an increase from 40 to 123 attacks in the last year. While total injuries only increased from 17 to 18, assaults that led to injury went up from 42.5% to 63%.

The increased attacks at Cox Medical were partially due to the pandemic, said staff, but were perpetrated by not just patients but relatives, out of stress and anxiety from not being able to see or accompany patients due to COVID-19 restrictions. “When Public Safety response is critical and it’s not possible to get to a phone, personal panic buttons fill a critical void,” said Alan Butler, who manages public safety efforts at CoxHealth’s six hospitals and more than 80 clinics.

The seven-day average of U.S. cases hit 267,000 Tuesday, breaking the previous U.S. daily case record set on January 11 at 251,232. This was partially due to the combination of cases brought on by the Delta and Omicron variants, reported The New York Times.
1(current)
2

More rural hospitals being pushed toward the brink of closure