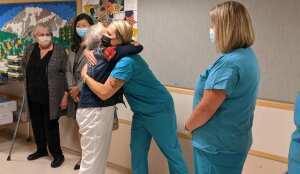 Florence “SeeSee” Rigney, 96, said goodbye to her colleagues at MultiCare Health System in Tacoma, Washington and went home to enjoy her retirement, which she plans to spend with her family and friends.

“I don’t know exactly what made me want to become a nurse, but it was something that I always wanted to do. I love to interact with patients and give them the help that I can,” said Rigney in a statement.

Rigney first donned the white uniform when she became a student nurse at Tacoma General School of Nursing. Her career has taken her cross-country, working in Washington, Texas and Wyoming, with small breaks in between to take care of her family and two children. Throughout it, Rigney witnessed a number of advancements in medicine, including the introduction of penicillin when she first started. She also saw the duration of patient stays decline from 10 days or longer following surgery to just a day or two.

Working primarily as an operating nurse, Rigney was tasked with setting up operating rooms to the specification of surgeons and prepping patients for procedures, including positioning them on the operating table. She initially retired at 65, only to come back six months later as a full-time nurse at Tacoma General. She switched a few years later to part-time, continuing to prep surgery rooms and patients. She eventually became an operating room nurse once more and filled in as a relief nurse at times.

To honor her years of dedication, MultiCare Health System is establishing the SeeSee Rigney Nursing Endowed Scholarship Fund, which will provide scholarships to MultiCare nurses for continued learning and development, as well as MultiCare employees seeking careers in nursing.

“It’s humbling to stop and think about the thousands and thousands of lives she’s cared for,” said Laureen Driscoll, president of MultiCare Tacoma General and Allenmore Hospitals. “Everyone at MultiCare thanks SeeSee for her unmatched dedication and service, and we’re proud to honor her by supporting tomorrow’s future nurses.”

For these and other future nurses, Rigney has some parting words of advice. “Don’t ever think that you know it all. I kind of did that when I was in the operating room and you have to always be open. You never stop learning.”