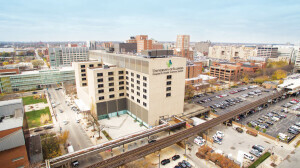 UI Health has reached a tentative agreement with the Illinois Nurses Association that could end nursing strikes
Over 1,400 nurses from The University of Illinois Hospital & Health Sciences System (UI Health) are putting down their picket signs after striking up a four-year contract agreement with the hospital and its clinic.

The “tentative” deal could mark the end of months of contract negotiations but only if it passes a vote among the nurses represented by the Illinois Nurses Association (INA), reported CBS Chicago.

“We are gratified to achieve this hard-fought victory after months of negotiations — this represents a vast improvement compared to where we were before the strike, and we are happy to see that the hospital recognized the importance of safe staffing,” INA President Doris Carroll, RN, told CBS Chicago. “The nurses were unified and strong and it paid off in what we think is a fair contract.”

More than 800 of approximately 1,400 nurses at UI Health and its clinics struck for seven days between September 12 and September 17, following four months of negotiation and 29 collective bargaining sessions. All nurses planned to join the strike but a judge ordered more than 500 who work in critical care units not to walk off the job due to the danger it would present to the public, given the current circumstances. The strike, however, prompted both sides to once again resume negotiations.

The deal offers nurses wage increases that keep them in the top 10% nationally, as well as hazard pay for working during a pandemic and a guaranteed rolling 90-day supply of personal protective equipment and universal N95 masking. It holds UI Health to a commitment to hire at least 160 more full-time nurses and promises innovations such as a new negative pressure wing for the hospital, upgrades to its airflow system and new windows that allow any room to be used as a negative pressure room with portable HEPA filters.

"We are very pleased that we have been able to come to a tentative agreement and we are grateful that our nurses chose to return to work on September 19, following a seven-day strike. This is in the best interest of our patients and our UI Health family,” said UI Health in a statement.

Another tentative deal has been reached to end a walk out of nearly 4,000 other UI workers who are represented by Service Employees International Union Local 73 and have been on strike since September 14.

Details of the agreement between UI Health and its nurses will be shared with the nursing membership at ratification voting meetings conducted by the union.

The vote to ratify the deal will be held this week, over three days.