Mild combat-related brain trauma can be detected with magnetoencephalography (MEG) 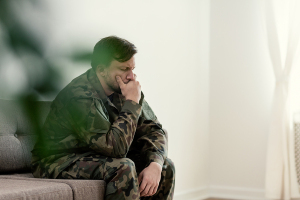 In the first study of its kind, research has demonstrated that mild combat-related head injuries are likely to result in abnormally high levels of gamma brain waves. The study was conducted using magnetoencephalography (MEG), which records magnetic fields created by electrical currents in the brain.

The study findings were just published in the journal of Cerebral Cortex. mTBI is a signature injury from post 9-11 conflicts in Iraq and Afghanistan, according to the VA. The Department of Defense estimates that 22 percent of combat injuries from the middle eastern war zones involve mTBIs (also called concussions), most of which are mild.

The study found that in mTBI patients gamma waves were “markedly elevated” in two of the four lobes of the cerebral cortex. The two lobes impacted manage reasoning, organization, planning, execution, attention, and problem-solving. Gamma waves are the fastest of brain waves and relate to the simultaneous processing of information from different brain areas.

“The new finding of ... MEG hyper-activity in (the) gamma band in mTBI offers a new and exciting tool for directly assessing the dysfunctional … interneurons in mTBI, which may explain many of the clinical symptoms and cognitive deficits,” said Huang. “mTBI is a leading cause of sustained impairments in military service members and veterans.”

He added that a combat blast is the primary source of war-related mild traumatic brain injuries. It is different from other forms of mild TBI, such as motor vehicle accident, sports injury, or falls. High-stress level, Huang said, is another major factor impacting combat TBIs.

Traditionally, Huang noted, it was assumed that white-matter brain tracts were primarily vulnerable to diffuse axonal (combat) injury. Even sophisticated diffusion-based MRI techniques for detecting white-matter abnormalities in mTBI have not been sufficiently sensitive for meaningful clinical applications. The VA MEG protocol, along with other animal studies, challenged this view by demonstrating that gray matter is highly vulnerable to diffuse injury detection as well. MEG imaging can also assist in tracking drug and other therapies to treat mTBI.

“The widespread nature and magnitude of the elevated gamma activity in the mild TBI participants was beyond our original expectations," Huang said. "We expected more subtle elevation. The marked elevation suggests there is widespread and pronounced injury in neurons of the central nervous system that play a key role in brain circuitry and activity.”