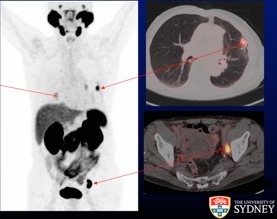 Prostate cancer found by PET/CT,
missed by conventional imaging
In what researchers are describing as the first prospective study of its kind in Australia, earlier detection for men with prostate cancer was realized using PET/CT scanning using Ga-68. The ensuing earlier detection changed treatment plans in 51 percent of cases – especially for patients with recurrent disease – to improve outcomes.

The study was presented at the 2017 SNMMI meeting in Denver.

“Ga68 PSMA scanning is a game changer in the evaluation of patients with prostate cancer, and has been consistently shown to represent a substantial improvement over conventional imaging for the staging of prostate cancer,” Paul J. Roach, MBBS, head of the Department of Nuclear Medicine at Royal North Shore Hospital in Sydney, Australia, told HCB News.

The study involved 431 patients over 18 months from four medical centers in Australia.

Nuclear Medicine specialists performed PET/CT in concert with an injected imaging agent composed of a tiny amount of a radioactive material called gallium-68 (Ga-68) and another molecular compound). Once administered, the agent zeros in on areas where the protein is being over-expressed on cell surfaces — including cancer that has spread from the prostate to other organs.

The radioactive markers distributed across these areas of PSMA over-expression emit a signal that is picked up by the PET scanner. A highly accurate map of the disease is then constructed to guide treatment.

“This is likely to become the primary imaging test for many patients with prostate cancer, and will replace conventional imaging in many cases,” said Roach. “Given the prevalence of prostate cancer, this will lead to a large increase in referrals to Nuclear Medicine/PET centers for Ga68 PSMA PET/CT scans worldwide.”

He added that he believes the study lends evidence to the position that the procedure should be covered by payors as a standard screening for prostate cancer.

According to the American Cancer Society, prostate cancer is the second most diagnosed cancer among American men. About 160,00 cases are estimated to be diagnosed this year, with an expected 27,000 deaths.