Can chili peppers put the heat on cancer?

Can chili peppers put the heat on cancer? 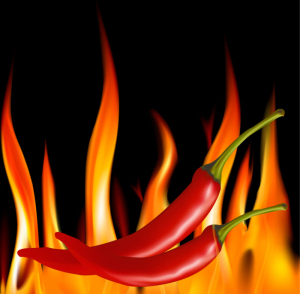 A chemical found in a chili pepper has shown it packs a potential breast cancer-fighting punch.

The latest “hot” news on research into capsaicin – the ingredient in peppers that gives them their pungency – has shown that it can “inhibit the growth” of such cancer cells, according to researchers at Ruhr-Universität Bochum, Germany, and fellow scientists at the Augusta clinics in Bochum, the hospital Herz-Jesu-Krankenhaus Dernbach and the Centre of Genomics in Cologne.

“Analyzing channel activation, we demonstrated anti-proliferative, anti-migratory and apoptosis/necrosis-inducing effects of capsaicin treatment, due to the activation of TRPV1 in SUM149PT cells, which is a model system for triple-negative inflammatory breast cancer, the most aggressive breast cancer subtype,” the researchers concluded.

“Triple-negative” cancer is so-called because it typically tests negative for HER2, estrogen and progesterone.

At present, chemotherapy is its only therapeutic option.

Their research revealed that the transient receptor potential channel TRPV1, which has links to cancer “hallmarks” via its role in regulating intracellular calcium, could be activated by capsaicin. “That receptor is activated by the spicy molecule capsaicin, as well as by helional — a scent of fresh sea breeze,” they observed.

This “caused significant inhibition” of cancer cell development, observed the researchers. Adding capsaicin to cell cultures caused cancer cells to divide more slowly, they found. Tumor cells also died off “in greater numbers,” and those that made it through their peppery treatment were slower moving — and less able to metastasize.

The presence of TRPV1 was confirmed in nine different samples of tumor cells from patients with breast cancer.

"If we could switch on the TRPV1 receptor with specific drugs, this might constitute a new treatment approach for this type of cancer," Hatt observed.

Capsaicin-like chemicals have been studied before, noted the researcher.

Arvanil, which is similar in structure to it, has shown promise against brain tumors in mice, although its side-effects proved it inappropriate for human trials.

In 2015, Indian researchers Ashok Kumar Mishra and Jitendriya Swain, determined that capsaicin “binds to a cell's surface and affects the membrane, which surrounds and protects the cell."
1(current)
2