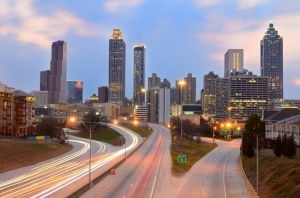 The Atlanta skyline
The stalled Emory Proton Therapy Center project in Atlanta has gone to nonprofit Provident Resources Group in a $350 million deal.

Hicks was first involved with proton therapy in 2006, thanks to a project with Cleveland Clinic and others in the Cleveland region.

“As I have learned more about proton therapy I have marveled at the technology, its complexity and how it is applicable to treating cancer in children as well as large mass cancer tumors in adults, including prostate cancer and breast cancer,” he told the business publication.

The project was let go by initial developer Advanced Particle Therapy when it ran into funding trouble, according to the publication, which noted that the Louisiana company will need to put in roughly $300 million to get the project up and running.

Just finishing construction will require about $240 million. Present debt of more than $110 million could be financed by bonds issued by Invest Atlanta, noted the publication.

“Our project in Atlanta is the first of four such projects we are actively pursuing and developing around the U.S. that include projects in the northeast, one in the upper Midwest and one on the West Coast, all involving major academic health institutions,” Hicks noted.

"This is significant for Winship but, more importantly, for our patients," Dr. Walter J. Curran, Jr., executive director of Winship Cancer Institute said at the time according to Emory's website.

"Proton beam therapy matters a great deal in improving outcomes in certain cancers, and in minimizing exposure to healthy tissues in others. We at Winship are committed to providing the most effective therapy to our patients that we can. For many patients, this will make a very big difference."

However, by July 2015 the center's construction was four months behind schedule and the project was in trouble, the Atlanta Business Chronicle reported at the time.

The project was described as “85 percent complete” by APT's CEO Jeff Bordok, who told the publication at the time that “this is a two-step process. Installing the equipment is just as big as constructing the building.”

In October, according to Atlanta Curbed.com, the project was getting back on track.

Ashley Preisinger, president of Georgia Proton Treatment Center LLC, told the real estate site that "good progress" is being made.

"The project is moving forward," Preisinger told the site. "We’re feeling more and more optimistic about getting our financing secured." That was “the only reason for the delay."

The heart of the issue, she suggested was that ATP "had three projects going in other parts of the country, and so as a result each project had its own little stops and starts, and it affected all the other projects because it was the same developer with the same resources behind it."