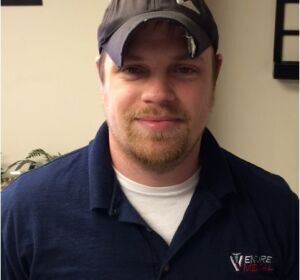 DOTmed: Tell us about this employee's new responsibilities.
Corey Dell was hired by Venture Medical in early 2011 as a biomedical electronics technician in the service department. Corey quickly became a top technician and was well liked by all of the clients he serviced. Corey also was successful in solving problems for customers that needed equipment in addition to service. As his skills grew, so did the attention of management. Corey was promoted to the sales department in February 2014.

DOTmed: Tell us a little about their personal life.
Corey has two children, a boy and girl, ages 6 and 5, who are the center of his life. Corey enjoys sports and music. He is a skilled guitar and drum player and is in a local band. He also recently joined an adult hockey league.

DOTmed: Please highlight their work experience and background.
Corey spent 4 years in the US Air force as an in-flight fuel boom operator on KC-135 strato-tankers. He flew missions over many countries, including Afghanistan and Iraq. After serving his country, Corey pursued his Bachelor's degree in Electronics, which he received in 2012. Corey has been employed by Venture Medical since early 2011.

DOTmed: What short term and long term goals do you have for them?
Corey is looking forward to using his customer service and technical skills to become successful in the sales department and assisting customers with all of their equipment needs. Corey can be contact at 800-627-3215 xt 207 or corey@venturemedical.com