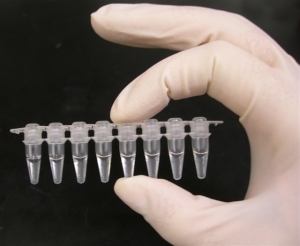 A new PCR is being researched
In a new study reported by The American Chemical Society, Naohiro Noda and colleagues from the National Institute of Advanced Industrial Science and Technology, Tsukuba, Japan, are reporting development of a faster, less expensive version of the fabled polymerase chain reaction (PCR), a method of cloning developed in the 1980s.

PCR was the first DNA test to clone materials so detectives can find the real culprits and free the innocent; so that paternity can be determined absolutely; and scientists can diagnose and begin treating diseases.

However, current PCR methods are too expensive and cumbersome for wider use, the researchers say. They have developed a new PCR method, called the universal QProbe system, which overcomes these problems.

Existing PCR processes require several fluorescent probes to seek out DNA. The new PCR test substitutes a single fluorescent probe that can detect virtually any target, saving time and cutting costs. The new method also is more specific, accurately detecting DNA even in the presence of unfavorable PCR products in the samples, which may interfere with results.

Universal QProbe could lead to expanded use of PCR in medicine, the criminal justice system and elsewhere, the researchers say. Their study is scheduled for the July 15 issue of Analytical Chemistry, a semi-monthly journal.