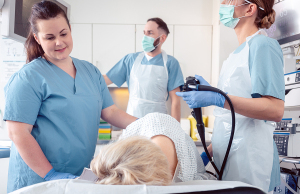 While reducing risk of death from colon cancer by more than 60%, detecting adenomas with colonoscopy varies among physicians, with missed rates ranging from 6% to 41%. “Those factors may include how meticulous the physician is in searching for polyps. However, certain precancerous polyps are so subtle and might appear only briefly or peripherally on the endoscopy monitor. We know that these polyps can be missed even during meticulous inspection by the physician. AI has the potential to help with this,” senior author Dr. Tyler Berzin, director of the Advanced Endoscopy Fellowship at BIDMC, told HCB News.

Berzin says the next step is to prove that the current research, largely obtained from clinical trials at university and academic centers, will lead to cost-effective clinical benefit in real-world clinical settings. “The other key take-home point is that while traditional colonoscopy already detects precancerous polyps earlier and more effectively than stool DNA tests and "virtual" CT scan colonography, the addition of AI polyp detection tools will likely further extend the advantage of colonoscopy as the gold standard for colorectal cancer screening.”

Colorectal cancer is the third most diagnosed cancer and the second leading cause of cancer-related deaths in the U.S. Those at high-risk have a threefold greater chance of developing colorectal cancer, which is why a three-year follow-up interval of colonoscopy is generally recommended. Many of these high-risk patients, however, may not know much about the benefits of colonoscopy, as evidenced in a 2020 study where 28.6% were unaware of either the need for repeat exams or proper surveillance interval.

The findings were published in Clinical Gastroenterology and Hepatology.