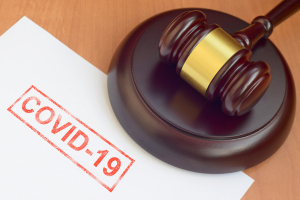 Keith Berman, 67, CEO of Decision Diagnostics (DECN), was charged this week by a federal grand jury with one count of securities fraud and one count of making false and misleading statements that his company developed a 15-second blood test for diagnosing COVID-19 with the prick of a finger. The test, in actuality, was an idea of Berman’s and not an actual product or validated method for accurately detecting the virus, according to the indictment.

Berman allegedly carried out the scheme between February and December 2020, telling investors that the FDA was on the verge of approving DECN’s request for emergency use authorization for the test. Internal emails he wrote indicate that he actually needed a “new story” to “raise millions,” as neither he nor his company had the financial resources and insurance necessary to conduct the clinical testing necessary for completing the FDA application process, according to the indictment. He also allegedly hired a political consultant to lobby members of Congress, telling them the FDA “mothballed” the company’s submission and that it was “stuck in limbo” at or around the same time that he told investors that the test was on the verge of approval.

Another accusation concerned the use of an alias, “plutoniumimplosion”, to repeat false claims to investors on internet message boards and refute allegations of fraud, saying that DECN “is in the forefront, no matter how loud the naysayers are,” and the projected demand for the test was “close to three billion [test] kits.” Berman falsely denied posting on the message board in a sworn testimony before the SEC and threatened civil or criminal sanctions against potential whistleblowers, according to the indictment.

The SEC filed a complaint against Berman in December in the U.S. District Court for the Southern District of New York, alleging that his false claims led to DECN’s stock rising by over 1,500% between early March and April. It hired Kaskela Law LLC to investigate DECN.

The filing and announcement of the complaint led DECN’s stock to drop by over 40%, according to Accesswire.