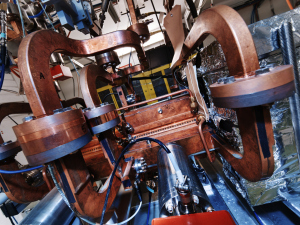 CERN and Lausanne University Hospital are teaming up to build a FLASH radiotherapy facility for clinical use (Photo courtesy of CERN)
CERN (also known as the European Organization for Nuclear Research) has agreed to develop the conceptual design of a FLASH radiotherapy facility at the Lausanne University Hospital (CHUV) in Switzerland.

The facility will incorporate high-performance electron accelerator components and simulation tools originally designed for CERN’s Compact Linear Collider (CLIC) to create a system that will be used in clinical settings to treat patients.

"The infrastructure for the FLASH facility is larger and more complex than that of a standard X-ray therapy machine, for example it requires about two to three times the bunker volume," Dr. Walter Wuensch of the CERN Knowledge Transfer Group and Dr. Manuela Cirilli, medical applications section leader for CERN, told HCB News. "We aim for a facility that fits on a typical hospital campus, so does not need a new, dedicated hospital center. We expect our FLASH facility to be smaller than recent compact commercial proton facilities, which, for example, don’t have a gantry or have a reduced gantry."

FLASH radiotherapy delivers radiation at ultrahigh dose rates of 40 Gy/s or more to tumors, in a targeted and precise manner that spares normal tissue from radiation exposure and associated side effects. Unlike 20 to 30 sessions of conventional radiotherapy, FLASH radiotherapy can be administered in two or three sessions and is delivered in milliseconds rather than minutes. It is also expected to increase dose escalation and be effective in treating cancers that are radiation-resistant.

Bourhis and his colleagues observed this effect when they administered the advanced form of radiotherapy on a patient in 2018 with a resistant superficial skin cancer. The treatment consisted of low-energy electrons of roughly 10 MeV. They are now aiming to observe its use in clinical trials, to treat tumors at depths of up to 20 cm in the patient.

This, however, requires higher-energy electron beams in the range of 100 MeV using compact linear accelerators. Such technology for handling this requirement was found in the conceptual design of a unique apparatus based on the CLIC accelerator technology designed by CERN, which says it will be able to accelerate electrons to treat tumors up to 15 to 20 cm in depth.

"The high-current beam is important for delivering the required dose in the FLASH timescales, stabilizing the beam is important for the reliability needed in a clinical facility, and controlling it is necessary for adapting the radiation field to each patient," said Cirilli. "A high accelerating gradient gives a compact facility."

Compact enough to be installed in existing hospitals, the system will be two to 2.5 times larger than a conventional radiotherapy machine, according to Physics World. The cost of the first prototype that is to be installed at CHUV is estimated to be about €25 million (more than $29 million), though if manufacturing grows, the price is predicted to decrease.

The partnership is set to finish the first phase of its study in September, at which point it will move from an initial idea to creating a conceptual design for the facility. CERN and CHUV will focus on developing the baseline design in more detail to optimize the system for treatments and plan to work with an industry partner who specializes in radiotherapy. CHUV also plans to prepare the required teams and infrastructure, and submit applications to regulatory agencies to make treatment accessible as soon as possible for patients.

"The emphasis of our current work is for a proof-of-concept; facility and optimizing the footprint will occur later on," said Wuensch and Cirilli.

The facility is expected to be operational within two to three years, at which point the team will begin testing proof-of-concept in clinical trials. Should the trials be successful, additional systems could be manufactured for other hospitals.