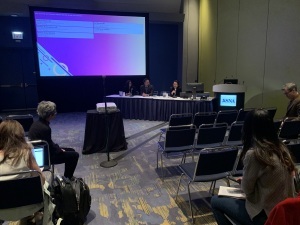 Diversity and inclusion create more welcoming
environments and result in better job
satisfaction and patient outcomes
About 50 percent of medical school graduates are women, yet only 27 percent take up residencies in radiology. At the same time, only 15 percent of medical school graduates who identify as underrepresented minorities pursue careers in radiation oncology and diagnostic radiology.

These are just a couple of the statistics brought up during a session called “Why Diversity and Inclusion Matter: Beyond Gender and Ethnicity” at RSNA last week. Among the factors influencing these numbers are outlooks of different age groups, criteria for accepting medical school residents, outlooks on radiology, and the ability to offer not just diverse but inclusive environments.

“Diversity involves having a mix of people with different traits in workplaces and communities,” said Dr. Yoshimi Anzai, associate chief medical quality officer and a professor of radiology at the University of Utah Health. “Having them together is a form of diversity, but inclusion goes far beyond that. Inclusion is more about efforts and practices to make people with different backgrounds culturally and socially accepted and welcome.”

She added that such differences shape our views and when brought together through interaction and work with one another, empower people to respect each other’s views. The result is greater job satisfaction and feeling “like you are part of something.” Achieving this type of work environment, she says, requires organization commitments, diverse leadership and a comfortable environment in which people feel they can express their voices and views.

One challenge to establishing these environments is the availability in medicine of underrepresented minorities; racial and ethnic populations underrepresented in the medical profession world relative to the numbers of the general population. Of the 16 percent of Hispanics who make up the U.S. population, only 5.5 percent enter into the medical workforce. The same can be said for the 12 percent of the population made up by African-Americans, with six percent becoming physicians. LGBT individuals are assumed to be part of these minorities by some, though a lack of data exists for properly recording their numbers in medicine.