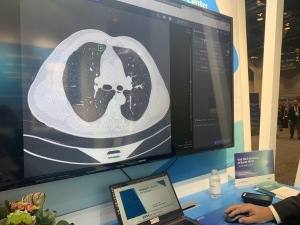 Infervision has a CT lung nodule AI application
that is about to become FDA cleared
Infervision gave onlookers a sneak peek at a set of its AI-based screening tools under evaluation, and one that is soon to be FDA cleared, at the Radiological Society of North America (RSNA) annual meeting.

Part of the company’s InferRead Suites, the applications pertain to the detection and quantification of lesions in Lung CT, brain hemorrhage, mammo, MSK fracture, bone age and fractures. Another application called InferScholar is a turnkey tool for medical imaging and radiomics research applications. The Lung CT application is called InferRead CT Lung and is expected to receive FDA clearance in the next month.

“The DICOM comes into our system and in 30 seconds or less, we will read the entire DICOM study,” Tony Gevo, vice president of Infervision North America, told HCB News. “If it’s stand-alone, you’ll use our worklist. If it’s integrated with the PACS, there will be an indication on the PACS worklist that there is an AI result waiting for a specific study.”

InferRead Suites provides onsite or cloud-based deployment of AI assistive screening tools for fast turnarounds of results, autogrenation of reports with follow-up recommendations for incidental findings, and integration with PACS, SRs or VNAs, among other capabilities. They are currently integrated with PACS Harmony, a commercially available universal worklist, and can be customized to fit the needs of the user.

InferRead CT Lung enables automated cancer screening for lung nodules. It also has a prefetch features that allow users to collect prior scans from within the PACs system to compare to new scan findings.

The next tool to be submitted for FDA clearance is the brain hemorrhage application, which detects and quantifies brain hemorrhages based on head CT scans within the "golden hour". Its use is expected to allow clinicians outside of neuroradiology to work on the same level as a neuroradiologist and to understand how to diagnose and address a patient’s head injury.

The aim of these and the other applications is to save time spent by radiologists on tasks such as entering information or taking measurements. InferRead Suites automates these processes, with users able to generate information in DICOM-structured reporting text style and send them automatically to a speech recognition report system, meaning that the physician will find the data in the template when he or she opens up their reporting system.

“The amount of time it saves the radiologists in entering data or doing measurements by hand and then speaking them in is about a 25 percent savings in the radiologist’s time ... I think another great thing about this is the overall concept of being able to use a number of algorithms on a single scan,” said Gevo. “If you go in for a chest CT, we don’t only want to look for the lung nodules. We want to look for the lymph nodes. We want to look for fractures. I think being able to use multiple products on a single scan is going to be very attractive.”

He adds there are also discussions about building a lymph node application. “I’ve walked all over this floor and nobody is doing lymph nodes, because that’s a very difficult application. There are dozens of them all over the place in the human body but they are earlier markers for different kinds of cancer. If you can catch it with the lymph node, you can prevent things from metastasizing.”

The applications are currently in clinical use in China, as well as Japan, Spain, Germany and Switzerland. They are also used at evaluation site partners in clinical trials throughout the U.S. These include the University of Maryland; Wake Radiology UNC REX Healthcare in Raleigh, North Carolina; Quantum Radiology in Harrisburg; and Stanford.

Top takeaways from RSNA 2019: The human side of imaging