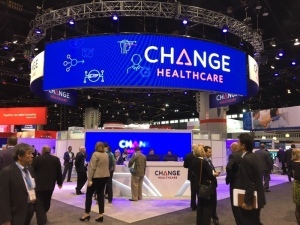 Healthcare revenue and payment cycle software firm Change Healthcare has filed with the SEC for an IPO.

The public offering could raise as much as $100 million, according to Seeking Alpha and other news sources.

The company had $3.3 billion in 2018 sales. Plans call for a Nasdaq listing under the name CHNG, with Barclays, Goldman Sachs and J.P. Morgan joining to orchestrate the offering.

In its SEC filing, Change stressed that as an “independent healthcare technology platform” it uses data- and analytics-driven software that is “designed to improve clinical decision-making, simplify billing, collection and payment processes and enable a better patient experience.”

It provides everything from “discrete data and analytics solutions to broad enterprise-wide solutions” that make it easier to move data between various healthcare participants – at scale.

“In the fiscal year ended March 31, 2018, we facilitated nearly 14 billion healthcare transactions and approximately $1 trillion in adjudicated claims or approximately one-third of all U.S. healthcare expenditures,” it stated, noting that its reach extends to serving “the vast majority of U.S. payers and providers.”

It has a customer base of about 2,200 government and commercial payer connections, 900,000 physicians, 118,000 dentists, 33,000 pharmacies, 5,500 hospitals and 600 laboratories. And it handles network transactions involving the “clinical records for over 112 million unique patients, more than one-third of the estimated total U.S. population.”

In October, 2018, Change hired underwriters for the deal, according to Reuters.

Change Healthcare launched in March 2017, and was a merger of McKesson’s technology solutions business with Change Healthcare Holdings Inc., which was owned by Blackstone Group LP (BX.N) and Hellman & Friedman LLC, according to the news wire.

In addition “a significant number of respondents” plan in the next year to unveil programs that deal with “care coordination, transportation, food insecurity, and other factors for members.”

Changes are just starting, however, most seemed to think.

“Healthcare is navigating disruptions on multiple fronts, and as a consequence, payers and providers are finding themselves stretched thin as they try to address a perfect storm of change,” said David Gallegos, SVP, Consulting Services, Change Healthcare in a statement about the survey. “As if insurance market changes, value-based care, consumerization, and regulatory uncertainty weren’t enough, this year the industry is facing a new breed of market entrants and innovators whose impact remains unknown but could be substantial. Even the largest healthcare organizations don’t have the people and processes to move on all these fronts alone, yet they can’t ignore these changes.”