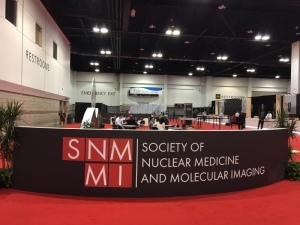 A team of Canadian researchers presented findings at the annual 2017 SNMMI conference on their work to tailor individualized care for patients suffering neuroendocrine tumors (NET). The research centered around targeted radiation delivery to avoid side effects and organ toxicity.

About 8,000 people a year are diagnosed with NET, which primarily occurs in the GI tract. It is difficult to manage and unlikely to be cured. However, forms of treatment and management are evolving to improve quality of life and survival times.

The Canadian project worked to aid survival by personalizing patient dose of peptide-receptor radionuclide therapy (PRRT), as opposed to the current practice of administering the same dose to every patient. Based on his experience caring for patients with NET, the lead author saw an opportunity to customize the treatment.

“When we administer treatments in nuclear medicine, contrary to other drugs including chemotherapy and pills, we can see exactly where and how much of our treatment actually goes into organs and tumors by doing a few scans after the administration,” Dr. Jean-Mathieu Beauregard, assistant professor in the Department of Radiology and Nuclear Medicine at Université Laval in Quebec City, Quebec, Canada, told HCB News.

He explained that this practice informs them of the radiation doses delivered to tumors and organs. This, he added, is highly variable between patients. Despite this knowledge, the current practice of PRRT is still to administer the same amount of dose to all patients, at each cycle.

However, this study marks the first time that 177Lu-octreotate PRRT has been matched to the patient's individual tolerance, based on finely-tuned SPECT dosimetry that evaluates how much radiation is building up in key organs, such as the kidneys.

A total of 27 neuroendocrine cancer patients underwent 55 personalized 177Lu-octreotate cycles from April to December 2016, followed by quantitative SPECT dosimetry. Radiation dose was quantified for the kidneys to optimize the administered amount of radioactivity, while remaining safe and well tolerated by patients. Side effects were recorded and blood counts, as well as renal and hepatic biochemistry, were performed at two, four and six weeks after each cycle of treatment.
1(current)
2