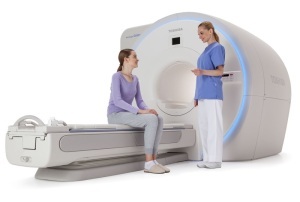 "There are some things that are unique to this system," Furuyama told HCB News. "It's the quietest system out there and it’s fast. By taking advantage of the new features on the Galan, users can perform a basic brain scan in about five minutes."

These operating characteristics, he explained, greatly facilitate throughput; another way of saying patients can be scanned faster and with less anxiety. This aids in both day-to-day patient scans, as well as in clinical research scans.

"The Galan's ultra-short TE (UTE) sequence generates images from signals that typically disappear on the sub-millisecond level," said Furuyama. "This allows for studies that have not been very easy to obtain in the past. For example, the junction where cartilage or ligaments attach onto the bone have historically been difficult-to-get images. The Galan system now offers this capability"

According to Furuyama, UCSD is also interested in non-contrast MRI scan research. Dr. Mitsue Miyazaki, Ph.D., a former Toshiba Medical researcher and leader in non-contrast MR studies has recently joined the staff at UCSD as principal researcher on the project. Furuyama said that - to a lesser extent - the research team is keen on research to develop non-contrast alternatives for Gadolinium. As reported by HCB News, there is growing concern about evidence that gadolinium - which does not occur normally in the human body - is being retained as a result of MR contrast studies.

“The Department of Radiology is committed to working to improve both patient’s lives and population health at UC San Diego Health,” said Alexander Norbash M.D., M.S., associate vice-chancellor for Diversity, professor and chair of Radiology, adjunct professor of Neurosurgery and Neuroscience, UC San Diego School of Medicine. “In particular, we have focused on increasing the throughput, practicality, and utility of MR Imaging.”

According to Toshiba Medical, the Vantage Galan 3T system increases signal-to-noise ratio by 20 percent. This allows for the faster sampling rate that produces higher-resolution images. The system also reduces sound during image acquisition by 99 percent.

Digital health raises $15 billion, sets record for M&A activity in first half of 2021