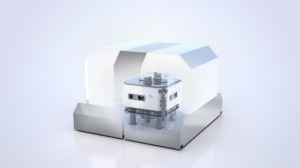 IBA's Cyclone KIUBE
The EANM meeting took place in Barcelona, Spain, and featured a flurry of innovations, research, and ideas for moving nuclear medicine forward. The event, which concluded Wednesday, brought together over 6,000 attendees aiming to further their education, reconnect with colleagues and see what kind of technology was emerging on the market.

IBA was there showcasing its Cyclone KIUBE cyclotron, which can generate up to 300 doses of FDG (fluorodeoxyglucose) — the most used radiotracer in molecular imaging — within two hours.

That is the highest production capacity ever for a PET generator. According to Bruno Scutnaire, president of IBA RadioPharma Solutions, these capabilities will allow providers to maximize the value of their molecular imaging offerings by generating more of the necessary tracers at a faster rate.

The Cyclone KIUBE is also reported to produce the widest range of PET radioisotopes with a beam current that can optimize production on as89Zr, 64Cu, and 99mTc.

The 18MeV cyclotron, which was originally unveiled at the SNMMI meeting in June, was designed to meet user demand for reliability, flexibility and high performance. The system has a footprint of less than 1,070 square feet and a self-shielding option.

The first unit of the Cyclone KIUBE was shipped to Belgium's University Hospital of Brussels in June.