Discussing second-quarter earnings with the CEO of Royal Philips 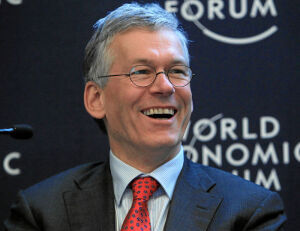 Frans van Houten via Wikimedia Commons
As Royal Philips separates itself from lighting, it is also undertaking a singular emphasis on health care. HealthCare Business News spoke to Frans van Houten, CEO, about the company's busy quarter two — one in which it publicly listed the lighting business (although it currently retains a 70 percent stake), and added big pieces to complement its vision for the hospital of tomorrow.

"In health tech we reported 5 percent comparable sales growth, on a currency-comparable basis, so we see that as a good job in the context of a world economy that is not particularly bright," said van Houten, adding that the adjusted EBITA (earnings before interest, tax and amortization) was €544 million — up 9 percent from the same period last year.

One reason for the improved numbers might be the $1.2 billion acquisition, 18 months ago, of Volcano, a catheter-based imaging and measurement solution company. "We see strong synergies on both revenue and cost side, as we've integrated it with our capital equipment for cath labs and hybrid operating rooms," said van Houten.

For the year, van Houten said the company is aiming for an adjusted EBITA of 11 percent. "Obviously we still need to do a lot in the second half of the year, but then again, Philips is always showing much greater revenue in the second half year, we get a little operational leverage and therefore, better profit margins," he said.

Taken as a whole, he believes these products and investments are allowing the company to integrate care and build it around the patient. "It may be a few years before various countries are completely there but I see this trend everywhere — it's value-based care," he said.

In a hypothetical review of the company's new strengths, van Houten gave an example of how a patient's treatment experience might progress. First, digital pathology will facilitate a faster and more accurate diagnosis of the problem. Then, catheter-based imaging solutions allow for a less invasive treatment strategy.

Since Philips is already a market leader in patient monitoring, according to van Houten, its IntelliVue Guardian software will help identify patient deterioration hours in advance of conventional tools. "With that software you can pull patients out of the ICU faster and into the general ward — you can send them home faster as we are extending our patient monitoring franchise in the home."
1(current)
2