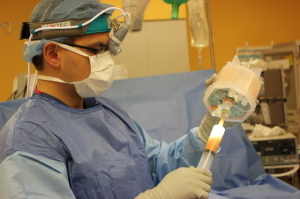 REVOLVE System in use.
Image courtesy of Dr. Allen Gabriel
From the January 2015 issue of HealthCare Business News magazine

To get an idea of what has been shaking up the cosmetic surgery market recently, look no further than the image of reality TV star Kim Kardashian that was plastered on the cover of an art and fashion magazine late last year.

“Between her and Jennifer Lopez, that’s who people are mimicking,” says Dr. Scot Glasberg, current president of the American Society of Plastic Surgeons and a private practice physician based in New York City.

While there’s no shortage of people seeking to recapture their youth through facetightening treatments using ultrasound and radiofrequency, buttock augmentation using fat transfer or fat grafting has been one of the fastest growing cosmetic procedures, with nearly 10,000 done in 2013, up 16 percent from 2012, according to statistics from the American Society of Plastic Surgeons.

Fat grafting, which consists of taking fat from one part of the body and adding it to other areas, most often the buttocks and breasts, has been enhanced, so to speak, by a new technology that cleans the fat so that it is more likely to be retained in the body, and not reabsorbed.

“The technology revolves around the processing of the fat, which used to be a clumsy and messy technique,” Glasberg says.

Glasberg uses a system called Revolve, manufactured by LifeCell, which cleans and processes the fat, usually taken from the patient’s abdomen, and then transfers it to the other area in a single, closed device. He says it allows the surgery to be done in one session, instead of two or three separate sittings.

A similar product is Puregraft from Puregraft LLC. In the past, technologies to remove free lipids and debris consisted of gravity separation or centrifugation. A study published in April 2013 in the journal Plastic and Reconstructive Surgery comparing three different fat graft preparation methods found that washing with filtration within a closed system using Puregraft, as opposed to using gravity separation or centrifugation, produces a fat graft with higher tissue viability and a lower level of contaminants.

“When you transfer it, the goal is to get a blood supply,” Glasberg says. “There’s a process and science behind it.”

Marie-Francoise Harris, group marketing manager for adipose cellular transplantation at LifeCell Corp., says one advantage of Revolve, which has a list price of $495 for each single-use device, is that the surgeon can harvest the fat and send it directly into the system, quickly processing a large volume of fat within the canister.
1(current)
2
3