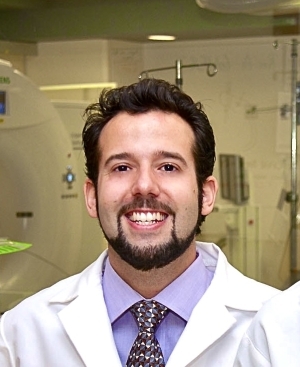 Dr. Theodore Marentis
A blood pressure sensor under development might one day help doctors use portable X-rays or other scanners to tell if a stent has failed, according to its creators.

The tiny implant, visible on modern high-resolution digital X-rays, would modify its shape based on blood pressure changes around the stent, which can indicate restenosis, according to its developer, Dr. Theodore Marentis, a fourth year radiology resident at the University of Michigan in Ann Arbor.

Radiologists or doctors would then be able to measure the change in shape of the sensor on the digital X-ray, either manually or using software, he said. That could tell them if the stent had failed.

"We've come up with a way to tell how much pressure drop there is across a stent, on X-rays, by putting a sensor along with the stent," Marentis told DOTmed News.

Marentis won a $30,000 grant to develop the technology from Agfa Healthcare and the Radiological Society of North America, which the groups announced Wednesday. Agfa is ponying up about $500,000 over the next five years to support radiology research. Dr. Jonathan Dillman, another University of Michigan researcher, also got a grant to study diagnosing Crohn's disease in children with ultrasound.

While figures vary from study to study, roughly one-fifth of modern, drug-eluting coronary stents, which prop open narrowed blood vessels, are believed to fail after five years, leading to restenosis, Marentis said. Currently, doctors can detect restenosis by threading-up a catheter and examining the area. They also detect it non-invasively using CT angiography, but Marentis said this was typically only good at picking up more obviously closed arteries.

"In the intermediate cases, it's really not very good," he said.

Because of "intellectual property issues," Marentis was reluctant to give too many details about the device, but he said it was small enough not to impede blood flow. Currently, there are two early versions of the device, which he has been working on since July, trying to create a prototype, which he hopes to have finished by the summer. The first animal studies would likely start in the fall, but Marentis said they would probably need to pick up some more grants.

Other sensors exist to detect restenosis around stents, but they typically work by emitting radiofrequency signals, Marentis said.

"The good thing with ours — it's a passive device," he said. "There are no electronics. You just read it on an X-ray."

Marentis, who has done work on tissue scaffolding engineering at Massachusetts General Hospital, said he got the idea after examining recent high-resolution X-rays, and realizing you could make out fine details, such as struts on a stent. Accordingly, the new device will likely only be visible on newer devices with at least 6 or 8 megapixel resolution, he said.