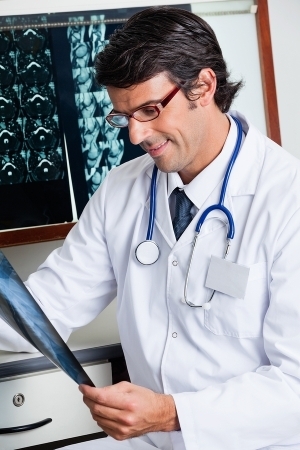 The yearly compensation for radiologists dropped from first place to third place according to Medscape's 2013 Physician Compensation Report. Radiology came in behind orthopedics at number one and cardiology at number two.

Orthopedics, cardiology, and radiology were the same as in Medscape's 2012 Compensation Report, although last year radiology and orthopedics tied for the number-one spot, according to the report.

But radiologists can't complain too much: A radiologist in 2012 made roughly $349,000. This includes salary, bonus and profit-sharing contributions for employed physicians. Orthopedic surgeons at the top of the chart made 405,000 and showed the highest increase in compensation in 2012, according to the figures. Experts speculate that the increase might be due to people now getting elective procedures as the economy slowly recovers, and more hips and knees being replaced as the population ages.

The report also found that doctors practicing in the North Central region, which includes Iowa, Missouri, Kansas, Nebraska, South Dakota, and North Dakota earn the most, and doctors in the Northeast Region earn the least.

"There's less managed care in the North Central region, fewer doctors, and a lower cost of doing business," said Tommy Bohannon. "The opposite is true in the Northeast."

Also similar to previous results were figures that showed doctors in group practices (single and multispecialty) were among the top earners. However, this year, hospitals compensated doctors at a slightly higher rate — $260,000 compared with 225,000 in last year's report.

While reimbursement cuts for all specialties, not just radiology, have been a sore subject, nearly half of all doctors feel they are fairly compensated and only a small percentage plan to stop accepting or reducing the number of Medicare patients they treat. A significant number of doctors have adopted a "wait and see" attitude.

Medscape surveyed 21,878 doctors across 25 specialty areas for the 2013 report, which was conducted in February 2013.