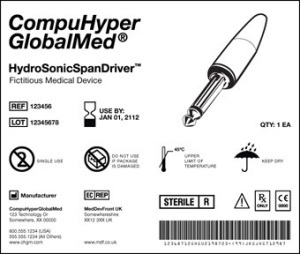 What the UDI
could look like
(courtesy of the FDA)
New medical device labeling designed to make tracking products through the supply chain easier is coming to the United States in the next year or so, but it's also poised for adoption in Europe and elsewhere. And the global spread of the system could help clinicians better understand what happens to devices after they hit the market.

The Unique Device Identifier system, which was again mandated by Congress in a Food and Drug Administration user fee bill over the summer, is a two-part system that involves a machine-readable label, such as a bar code, and human-readable text. Backers of the UDI system believe a universal labeling system could be a boon for health care, allowing materials managers to get a better handle on their inventory and to comply quicker for recalls of defective products.

But some experts also think the system — especially as it goes global or gets hooked into electronic health records — could help patch over gaps in medical device epidemiology, enabling researchers to study how devices fail and even how they stack up against each other out in the real world.

What happens is, after medical devices get released, government regulators sometimes insist that manufacturers run post-market surveillance studies to provide more evidence on the safety or effectiveness of the device. But post-market data is often "thin on the ground," in the words of one researcher.

"Its difficult to find good data on devices after they're approved," Dr. Joseph Drozda, a physician with the four-state regional Mercy health system who's running a study on building a UDI-related database for device epidemiology, told DOTmed News.

And thanks to wider adoption of the UDI and projects like Drozda's, that could change.

In the United States, UDI rules have been in the works for years, but legislation over the summer likely helped kick-start the process again. In a user fee bill, Congress ordered the FDA to release proposed rules for the system by the end of the year. The agency released those draft rules in July, and final regulations are expected as early as this spring, with the system applying to higher-risk products within one year of their publication.

The next stop after the U.S. is probably Europe. Likely prompted in part by a scandal around a French breast implant maker that sold dodgy implants with a high rupture rate, on Sept. 26, the European Commission issued a proposed directive on reforming the medical device process. The directive, which still has to be approved by the European Parliament, included adopting the UDI, and building and expanding a continent-wide, publicly available device database, called Eudamed.
1(current)
2
3
4