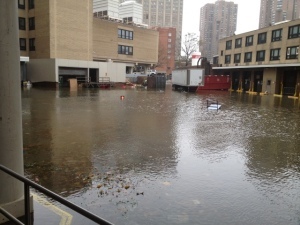 The flooded courtyard of
the Manhatan VA
(Credit: VA New York Harbor
Healthcare System)
An MRI located on the ground floor in an outpatient clinic area of the Manhattan VA hospital was "destroyed" during flooding from Superstorm Sandy nearly two weeks ago.

"The damage at the Manhattan campus is extensive," the hospital's director Martina A. Parauda said in a statement.

The Siemens Avanto scanner was one of many pieces of equipment at the hospital to be ruined by the historic storm, which closed down several hospitals in New York City as it ploughed up the East Coast, killing over 100, leaving millions without power and racking up tens of billions of dollars in damages.

The storm, which unleashed a powerful storm surge that soaked lower Manhattan, caused between 4 and 5 feet of flooding in the sub-basement and ground floor, where the scanner was located, a spokeswoman for the VA New York Harbor Healthcare System told DOTmed News by e-mail.

The MRI was wrecked and needs to be replaced after being immersed in the water, she said.

Luckily, no one was hurt in the flooding of the hospital, as nearly 100 patients had been evacuated on Oct. 28, before the storm landed.

The hospital, located on East 23rd street hard by the East River, said it was too early to say when things will be up and running again. The sub-basement housed the hospital's utilities, meaning mechanical switches and other electrical equipment were destroyed.


"The damages have been assessed by VA Central Office, but we do not know yet what we are looking at in terms of a timeline," the spokeswoman said.

She said once utilities are restored, the hospital will undertake a construction project to move the outpatient facilities off the ground floor.

The new MRI unit would likely be set up in a new location, and the hospital would not need to replace it with an identical model, she added.

She wasn't able to give a cost estimate for the lost MRI. The average cost of a new MRI is $1.95 million, according to recent figures from the Modern Healthcare/ECRI Institute Technology Price Index.

Sandy made landfall near New Jersey on Oct. 29, whipping the East Coast with powerful winds and sending floodwaters across the region. Considered one of the worst storms to ever hit New York City, it left thousands without power for weeks and shut down the subway system millions depend on to get to work. More than 43 New Yorkers also lost their lives — many drowned, but some perished from falling trees, downed power lines and other hazards.

The total death toll for the storm is estimated at more than 121 and the cost from damages and economic losses could exceed $50 billion, according to Reuters.

Bellevue Hospital and New York University Langone Medical Center were also evacuated after the storm hit. The NYU hospital, which had not planned on evacuating, had to make the call after backup generators failed. It remains closed after sustaining damages from the storm, according to the hospital's website.

NY1 reported that full service would likely be restored to Bellevue Hospital in early February. Coney Island Hospital, also hit by the storm, is currently only offering primary care services, but should completely reopen in January, NY1 said.