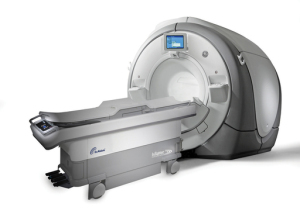 The ExAblate (Credit: InSightec)
Israeli medical device firm InSightec Ltd. said Monday that the Food and Drug Administration expanded the indications for its MRI-guided focused ultrasound system so it can now be used to relieve pain in patients whose cancer has metastasized and traveled to the bone.

The device was approved for patients who are ineligible for radiation therapy or who previously underwent the treatment and did not get pain relief, InSightec said.

Two-thirds of breast and prostate cancer patients whose disease has metastasized suffer from painful bone metastases, the company said, citing the American Cancer Society, and up to one-third of metastatic bladder, lung and thyroid patients.

For about 30 percent of patients with bone metastases, radiation therapy is contraindicated or unhelpful, InSightec said.

A phase 3, randomized multi-center trial, which was the basis for the FDA's recommendation, found patients who underwent the focused-ultrasound treatment had had better pain relief when compared with a group that got sham treatment .

"This seems to be a technology that can treat patients without any really serious toxicity," Dr. Joshua Meyer, a physician with Fox Chase Cancer Center, one of the 15 facilities to participate in the trial, said in a video produced by InSightec and posted online.

InSightec said it would also run a post-market follow-up study of 70 U.S. patients as well as set up a registry to gather patient data.

The privately owned company, which is partly controlled by General Electric Corp., is also exploring other treatment areas for its family of MRI-guided focused ultrasound systems. This summer, the FDA allowed a clinical trial to go forward to test a related product, the ExAblate Neuro, as a possible therapy to relieve tremor in Parkinson's patients.

Dr. Mark Hurwitz, the principal investigator of the ExAblate bone mets trial, explains the study in a video produced by InSightec: