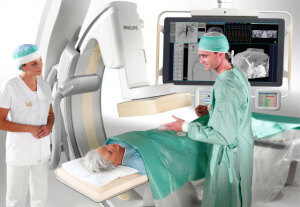 
The market for catheter angiography equipment is well on its way to recovery from the economic downturn, a trend that both OEMs and resellers say will continue into the future.

Catheter angiography equipment was the first to recoup from the recession according to Richard Fabian, vice president of X-ray business North America for Philips Healthcare. “It was the first to come out of the market decline, and it led all of imaging systems for growth,” he says. “It has now leveled off at pre-recession, pre-health care reform levels.”

Daniel Wheeler, president of Transtate Equipment Company, says the growth is driven in part by just how invaluable catheter angiography equipment can be in a hospital setting.

“The technology for cath/angio is the gold standard for diagnosing heart disease,” says Wheeler. “So the market is growing. It is growing internationally, and it is growing significantly.”

Chris Sharrock, product manager for Block Imaging International, says that the growth in the past few years is also due to timing — in 2002, flat panel detectors were introduced into the market and revolutionized the field of medical imaging.

Older models relied on an image intensifier to magnify, capture, and process the image. “When flat panel detectors arrived it really changed the game,” says Sharrock. “They have much higher resolution, full digital processing, and far less limitations with image magnification.”

The result was equipment that required lower doses while producing better quality images. In the past few years, leased equipment and older models have started to enter the refurbishing market in large volumes.

The time lag between the introduction of new technology and updating systems across the board can be significant, according to Sharrock.

“Every modality has its moment,” he says. “There’s a big leap forward, and everyone catches up. Ten years later, there’s another significant jump, and it takes 10 more years for everyone to catch up again.”

Sharrock predicts that much of the industry’s focus will continue to be on reducing radiation exposure. “The FDA is very, very firm on this,” he says. “The direction everyone will be going is less dose, better quality.”
1(current)
2