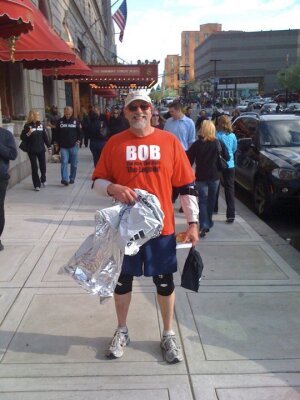 Running the marathon is harder
than running a business,
said PRN's Bob Gaw

Gaw took up running 12 years ago and started training in October for the Patriot's Day event April 19.

"It was tough training outside in the New England winter," Gaw said. "That's where being in the business and having a few extra treadmills hanging around comes in handy. It's a simple training system; if someone can run for three miles straight by the end of the summer I can have them doing next year's marathon."

DOTmed users are welcome to call and ask him about parlaying your love for running into preparing for the athletic crucible.

As a matter of fact, Gaw said, "Running a medical equipment business is easier than running the Boston Marathon but they are equally rewarding. They both require a lot of hard work and dedication. The pains eventually go away but the achievement of goals lasts a lifetime."