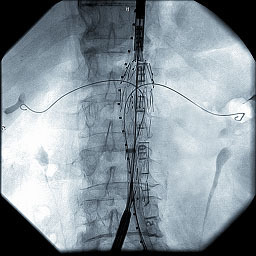 These findings were presented at the 63rd Annual Meeting of the Society for Vascular Surgery.

Due to proximity to the visceral arteries, endovascular surgery is typically not an option. However, fenestrated and branched endografts provide a less invasive means of repair, Dr. Beck told the meeting.

He and his team of researchers found that endograft repair for these types of aneurysms has a high success and low re-intervention rate and will likely decrease the complication rate of treatment in these patients who are considered high risk for open surgery.

Eighteen patients with an average age of 72 years were included in the study that was conducted at the University Medical Center of Groningen in The Netherlands by Eric L. G. Verhoeven, MD, department of surgery, and his colleagues between March 2004 and November 2008. All of the patients had previously been treated for aortic aneurysms with open repair using Dacron tube or bifurcated grafts. The original procedures were performed from 1 to 15 years prior to their development of an aneurysm or further aneurysmal degeneration of the aorta.

"The average length of these procedures was four hours and blood loss was 560mL. With the exception of one patient requiring a planned open access of a renal artery, all were successfully treated using endographs," he said.

Patients were walking and eating in about one day and all but two were discharged from the hospital by four days.

The mean number of fenestrations per patient was three. Patients were successfully revascularized with a combination of: fenestrations with bare metal; covered stents; directional graft branches; and proximal graft scallops.

There were no deaths at 30-days, and at one-year mortality was 11 percent. Mean follow-up time was 23 months and cumulative primary patency was 95 percent, Dr. Beck said.