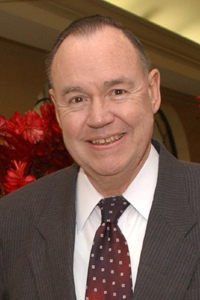 Dr. Grundy was honored with the Gold Heart Award, an annual award and the highest honor the association gives to volunteers who have provided continued distinguished service.

An American Heart Association member since 1973, Dr. Grundy has played a pivotal role in the development of the AHA's recommended treatment guidelines for reducing risk factors associated with cardiovascular disease.

He has served on more than 20 of the organization's national committees and task forces, often as chair, and served as the association's first representative to the U.S. National Cholesterol Education Program (NCEP) when it was established in 1985.

In 1993 and 2001, Dr. Grundy headed the NCEP Adult Treatment Panels II and III, made up of the nation's top cholesterol experts. The group was charged with setting national guidelines for controlling cholesterol to prevent coronary heart disease.

"The NCEP has set the standard for treatment of high blood cholesterol in the United States, and I was privileged to be the chair of the treatment panel of the NCEP between 1991 and 2005," Dr. Grundy said. "The guidelines set by the NCEP not only have been accepted as the standard in this country, but they also have been influential worldwide."

More recently, Dr. Grundy chaired the AHA's Council on Arteriosclerosis, which he helped expand to include thrombosis and vascular biology, and helped form the Council on Nutrition, Physical Activity and Metabolism.

In 2003, he started a program at two Dallas-area barbershops to improve the awareness, treatment and control of high blood pressure among African-American men by having the barbers measure their customers' blood pressures when they came in for a haircut.