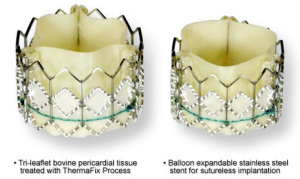 Note that both the non-surgical and surgical arms of the study have been ongoing since 2007.* The surgical arm of the trial compares the outcomes of patients using the transcatheter valve to those undergoing open-heart surgery. The clinical trial sites are continuing their enrollment of up to 690 surgical patients.

If results from the trials are good, Edwards' device will be the first valve of its kind to win approval in the U.S. in 2011.

The percutaneous valve, made from bovine pericardial tissue, is called the Edwards SAPIEN valve.

Cedars-Sinai Medical Center in Los Angeles is participating in the study, called the PARTNER trial, under the direction of Dr. Raj Makkar, director of interventional cardiology and Dr. Gregory Fontana, a cardiovascular surgeon. More than 20 medical centers in the U.S., including New York-Presbyterian Hospital/Columbia University Medical Center, are also participating in the trial.

In time, analysts say the valve will open a huge, new market for Edwards, as many people in need of a new left ventricular valve will no longer have to undergo open-heart surgery.

But for now, Edwards is trying to win approval for patients who are either at high risk for traditional open-heart surgery and for others who are not candidates for surgery at all, because they are elderly or have multiple co-morbidities, Cedars-Sinai's Dr. Makkar tells DOTmed News.

He explains that aortic stenosis is a condition where obstruction of the heart's aortic valve keeps it from opening properly and blocks the flow of blood from the left lower ventricle to the aorta. In severe cases, the blockage can prevent blood from reaching the brain. Patients with the condition often feel shortness of breath.

The stent-based valves are already hotly competitive in Europe, where the market for the device is growing rapidly. Edwards and Corevalve (recently bought by Medtronic) are locked in litigation over key components of the valve's technology.

However, in the U.S., Corevalve and the FDA have yet to agree on a study design for Corevalve's trial, analysts say. This means that Edwards' valve will likely have the edge among physicians in the U.S., before others can win approval.

Crimped on a Balloon
1(current)
2

Combatting the growing threat of cyber attacks on healthcare organizations