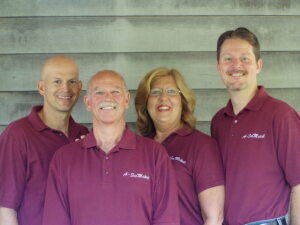 Thomas Stratton of A-Stat Medical,Davidsonville, MD, just outside of Washington, D.C., has always felt at home around medical equipment. And it's little wonder: Stratton launched A-Stat Medical some 19 years ago and has been in the business for over 40 years. He started out working for his dad, T. J. Stratton, who began selling sterilizers and wheelchairs in 1956.

"We primarily did repairs," Stratton says. "A majority of the work we did back then was on sterilizers, ECG machines, electrosurgical units and OR tables.

In those days Tom and his father also sold and serviced diathermys. "Diathermys were a deep heat medical device that used short-wave energy to treat sinus conditions, atrophied muscles and lower back pain," says one of Stratton's three employees, Cragg Howard, whose background is in electronic engineering.

Another of Stratton's team of four, Tom Liberatore, was a lead aviation mechanic at US AIR before joining A-Stat Medical. The men refurbish all their equipment in-house. Rounding out the A-Stat team is Vickie Perkins. Vickie uses her extensive business knowledge, gleaned from her previous career with a prominent Washington D.C. law firm, to keep things running smoothly in the office.

Although Stratton's father was not an engineer, he was a carpenter who was "very mechanically inclined," his son recalls. "A few years after he started his business, T.J. Stratton Company, my father took on a partner to sell equipment, while he serviced it," Stratton says. Next he started selling medical equipment for Britcher Corporation, a company which was bought out by ConMed Corporation about seven years ago.

"We sold and serviced their equipment, including their ECGs and hyfrecators. We also repaired and sold Ritter Corporation's medical equipment," Stratton says.

As time went on, the company continued to expand. "We did a lot of work in hospitals before they had biomedical techs.

"When they started hiring biomed techs, we were being phased out and started focusing on private physicians' offices as our new primary market. That's where most of our business comes from today," Stratton says. "Our core customers are private physicians and physical therapists, chiropractors and veterinarians."

Stratton says that his company's services are constantly in demand and that he gets a couple of new referrals from doctors every month. His primary means of advertising is word of mouth.

When asked what his plans are for the future, Stratton jokes that he's so busy, it's hard to think of the future. "I think we'll add more people, as the need arises, in both the sales and service areas," he says.