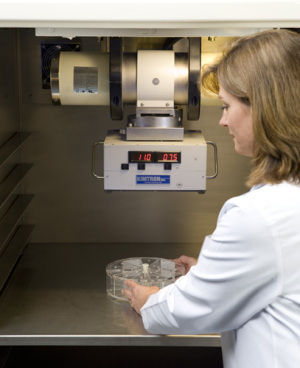 Currently, Kimtron Inc. and its subsidiary, Kimtron Medical, Woodbury, CT are firing on all cylinders with contracts in the medical and military sectors, among others.

The companies' partners, Peter Cawley and George Gugliotta, started Kimtron Inc. in 1994, to manufacture x-ray components for industries including aerospace, automotive, fiber optics and defense, to name a few.

The partners started Kimtron Medical in June 2006 after buying Danbury Engineering, a medical x-ray sales company, which refurbished x-ray therapy for "superficial cancers" such as skin cancer. The fully refurbished and fully supportable systems often sell for half the price of a new one.

The product Cawley and his partner were most interested in buying from Danbury Engineering was its family of x-ray based Cesium replacement systems, used by scientists who conducted genetic or cellular research and needed to irradiate specimens and cells.

"Electrically initiated x-ray is a much safer and greener means of irradiating a specimen," Cawley says. "There are no storage or handling issues for the user to be concerned with and moreover, every part of an x-ray system can be recycled. There is no depleted material to worry about disposing of."

Kimtron's system costs about $100,000 and is analogous to a flashlight: If there is no power to the x-ray tube, there is no radiation, Cawley says.

What is more, Kimtron is the only company in the U.S. that makes a 100 percent U.S.-based system. All its components are made by Kimtron or purchased from partners who also manufacture in the U.S. Also, in terms of power consumption, its systems are 30% more efficient than other systems on the market.

Kimtron Medical's other business manufactures and refurbishes x-ray equipment to treat superficial cancers such as skin cancer--replacing the need for surgery.

Meanwhile, the parent company, Kimtron Inc., is experiencing a cycle of extremely strong growth, since many of its customers are defense and aerospace contractors. But if the war in Iraq were to end, that business would suffer. Fortunately, the company's commercial business has more than 600 customers. It manufactures X-ray equipment for such products as jet engines, automotive wheels, tires and many other products needing non-destructive quality control.

In addition, Kimtron has a distribution network in North America, where the company sells its U.S.-made components to systems integrators. These customers use the components in their completed systems for end-users.

"We're proud of the fact that everything is made in the U.S. Our customers like that, too, especially since all of our chief competitors are European," Cawley says.