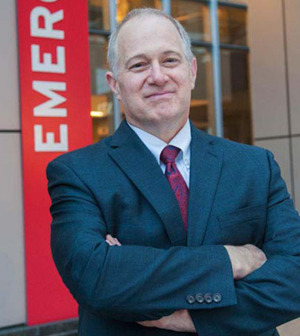 “At this moment of great change and opportunity, David’s deep and proven commitment to our academic mission, to the patients and people of MGH and our system, and to Mass General Brigham’s strategic vision make him the perfect choice for this important position. As a leader, David has advanced our long-standing legacy of delivering the highest-level care, research and innovation – and has a clear vision of the path forward as we continue to build the integrated academic health care system of the future with patients at its center.”

As Chair of Emergency Medicine at MGH since 2013 and Vice-Chair for a decade before that, Brown has significantly advanced MGH’s research and education missions. He has been recognized with multiple awards and currently also serves as the Chair of the Executive Committee on Teaching and Education and as the Academic Head of the Harvard Affiliated Emergency Medicine Residency at Mass General Brigham. In these roles, he has led the training of a generation of world-class clinicians, educators, scientists, and policy experts, many of whom have gone on to leadership positions in their own right.

Over the last three decades, Brown has seen the needs of the communities Mass General Brigham serves up close and unfailingly applies an equity lens to his decisions, actions and outcomes. In addition to attending in the MGH ED and ED Observation Unit, Brown has also cared for inpatients on the MGH medical service and outpatients in Chelsea, Revere and the Internal Medicine Associates Clinic.

Brown was a co-founder and an inaugural board member of Mass General Brigham Urgent Care, which serves 9 locations across the region and has chaired the Mass General Brigham Emergency Medicine Leaders Committee since 2014. He has also been integral to a number of systemwide efforts, including committees on senior appointments, education and multiple search committees for hospital leadership. Since March, Brown has been serving as Interim President of Cooley Dickinson Hospital while a search was conducted for its next President—Lynnette M. Watkins, MD, MBA—who was announced last week.
1(current)
2