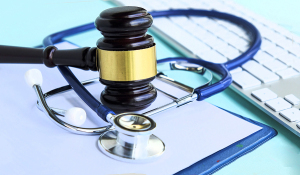 A patient's allergic reaction to gadolinium during an MR exam has cost a hospital $10.83 million in court-ordered damages.
A Pennsylvania hospital has been ordered to pay $10.83 million to the family of a man who suffered life-changing brain damage following an MR scan in 2016.

Christopher Carey Miller, 45, of Tyrone was left with the mental acuity of a young child after going into cardiac arrest due to an allergic reaction to gadolinium administered to him during the exam. The unanimous verdict awarded $6.21 million of the award to Miller’s future medical expenses and round-the-clock supervision over the next three decades, with the rest to be used for his medical expenses to date, lost earnings, and for pain and suffering. The suit was filed by Miller’s parents, according to the Altoona Mirror.

“It was like the end of a nightmare and to our ongoing concerns about Chris,” Timothy Miller, Miller's father, told the Altoona Mirror. “Everyone said, ‘yes’.”

Christopher was 41 when he suffered the allergic reaction in October 2016 while undergoing an MR scan for back pain. The MR room he was in did not have an alarm or an emergency drug box.

MR technologist Sherry Piper recognized the adverse reaction to the gadolinium and told the jury that she went to the room’s control center to activate the alarm and then yelled for help in the hallway. Supervising radiologist Dr. Kelly Biggs saw Miller in the MR room and fetched Dr. Anthony Zinobile, the emergency room medical director. Zinobile directed that Miller be moved to the nearby ER. Miller suffered brain damage during cardiac arrest that has now left him with the mind of a child. Witnesses indicated that the MR room does not contain an emergency drug box since the nearby ER has one that contains supplies such as the anti-allergy medication, ephinephrine.

“Gadolinium-based contrast agents have very low rates of adverse events,” Tobias Gilk, founder of Gilk Radiology Consultants and a board member of American Board of Magnetic Resonance Safety, told HCB News. “The most common forms for these are severe nausea and vomiting. Patients can have allergic or allergic-like reactions such as getting flushed and developing hives. Those sort of intermediate level reactions are rare. Then you can have the really severe anaphylactic or anaphylactoid type of reactions where it directly impairs patients’ respiration and potentially catastrophic effects. Those types of reactions are possible with all gadolinium-based contrast agents.”

Attorney Michael Sosnowski, who represented Tyrone Hospital, told the jury that Miller would have required additional assessment before being administered ephinephrine. The plaintiffs’ attorney, Brendan Lupetin, however, told the jury to recognize Miller’s lack of treatment, and had Dr. Michael Bruno of Hershey Medical Center testify about his use of epinephrine to help one of his own patients experiencing an allergic reaction. “They wasted precious time."
1(current)
2