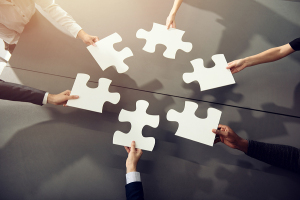 The maxim “a chain is only as strong as its weakest link,” is a nice thought, but it realistically only applies to chains. The fact is, a standout star can deliver success to an otherwise average team. However, using another well-worn phrase, that’s putting all your eggs into one basket. Building a strong team where each member brings in strengths to complement the weaknesses of others is perhaps the best recipe for success. Doug Kirsop, OhioHealth transformation director, has had experience building a successful team and he spoke with HealthCare Business News about the process.

He was brought into OhioHealth four years ago as the first HTM director for the system. Like many medium-large to large systems, OhioHealth has grown through acquisitions. At the time that Kirsop assumed his role, there was no one working across the entire system, which essentially meant there were smaller talent and knowledge islands and the strength of the organization’s size was not being brought to bear.

Kirsop says the acquisitions were mainly operating on their own, with some common management oversight. “People were not opposed to working with each other, the work to optimize process just hadn’t been a priority,” he says.

He set his focus first on the clinical engineering side. He created a clear management structure and then worked to standardize everything from tools and equipment to process. He looked at what could be automated as well as what needed to be replaced. For example, some test equipment was a decade old or older — new, more efficient equipment could be purchased because less was needed once process was improved. Beginning an AEM program improved where, when and how the organization carried out preventive maintenance. Kirsop also leveraged the economy of scale that comes with working for a larger organization, which allowed for more maintenance work to be brought in-house using the rationale that training staff on more equipment could be justified since it wasn’t one unit at one facility, but multiple units across the system.

However, Kirsop is quick to point out that it wasn’t just him streamlining process, reducing costs and tapping into the economy scale. “It wasn’t me. It was the team,” he says. “The requirement, when it comes to determining the ways to do things, comes from group discussion. There were newly appointed supervisors with areas to focus on, tribal knowledge, documentation – all those things were brought together to create the common approaches of how we do the work.”
1(current)
2
3

Are you ready for the 2022 AAMI eXchange?

Getting the facts straight: Clarifying Remanufacturing to Protect Patient Safety Act of 2022