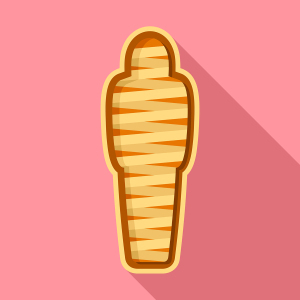 Scranton, Pennsylvania's Everhart Museum had a Peruvian mummy filled with mysteries on its hands — and plans to feature it in its latest exhibit about the Andes. So it turned to its neighbor across the street, Geisinger Community Medical Center (GCMC).

“This was certainly the first mummy I’ve ever encountered,” said Dr. Scott A. Sauerwine, medical director for Geisinger Radiology in a statement, adding that he felt, “we made some interesting observations and contributed to answering some of the museum’s questions.”

But the mummy study came with a twist — the remains were curled into a fetal position and sealed in a glass case to protect it, so CT scanning would not work. Instead, diagnostic and forensic radiologist at Geisinger Lewistown Hospital Dr. Dana R. Jackson, who examined the mummy, turned to X-rays.

“Evaluation of the mummy was akin to investigating a detective mystery. Dr. Sauerwine and I both enjoyed evaluating the mummified remains,” said Jackson in a GCMC statement. “Sharing and discussing our findings with each other, I believe, yielded a comprehensive, respectful and significant evaluation of the decedent.”

All the museum knew about the mummy, last on display in the 1990s, was that in 1923 prominent Scrarnton-area dentist Dr. G. E Hill, donated it to the Everhart Museum after a “stint” in Peru, according to its archives. Its researchers had identified it as coming from 800 – 100 B.C.E, during the time of the Paracas culture, one of South America's earliest known, which was centered in what is now southern Peru. Its people would mummify the dead in cloaks that were embroidered, with “among the finest examples of the art of textile making,” according to Britannica.com.

Based on X-rays, Jackson found that the mummy is most likely a teen boy, although “the pelvis wasn’t visible,” he found, based on “the interorbital distance and shape of the orbits.”

The boy was about 5 feet tall — in keeping with typical stature in the era — and had no broken bones. He did, however have spinal calcifications, indicated some a metabolic disorder and was missing toes, either from post-mortem injury to the body, or infection, frostbite, or accident in life.

Everyone is fascinated by mummies, noted museum executive director Aurore Giguet. “Peruvian mummification traditions started seven thousand years ago, that’s much earlier than in Egypt, and lasted until the Spanish conquest 500 years ago.”

This is just the latest case of using modern medical imaging to uncover the secrets of mummies.

In December, 2017, researchers found the oldest known cases of breast cancer and multiple myeloma to date in two mummies dug up in the pharaonic necropolis of Qubbet el-Hawa in Aswan, Egypt, using CT scans.
1(current)
2