Big ego vs. strong ego: Which is better? 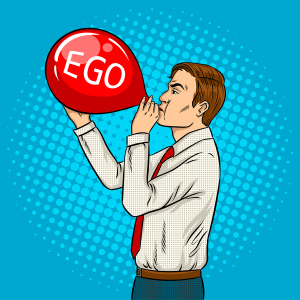 Everyday in business, we have to deal with people and frequently, we must deal with their egos. People could argue about the definition of big ego vs. strong ego and for that matter, even what it means. But just to make it easy, let's use the terms 'insecure' and 'confident'.

I suppose it is possible for someone to have confidence in themselves and believe that they can do the job, in some cases, better than anyone else. You have to wonder if the term, 'micromanager' applies. But in any event, I believe people who are confident in themselves have what I call, a strong ego.

On the contrary, in my opinion, the term 'big ego' is synonymous with 'insecure'. That person always has to be the center of attention. They have to put other people down. They cannot accept criticism or disagreement. And they want to take credit for everything good that happens and everything bad, blame on someone else.

If success was easy, everyone could have it and we know it isn't. Sometimes, we have no choice but to deal with people who have a big ego and in fact, the stronger your ego, the easier it is to deal with them.

You can ask me what this has to do with healthcare and maybe the answer is, nothing. But it is a conversation I had with a fellow this week, whom I respect and I wanted to share it with you.

See you next week.