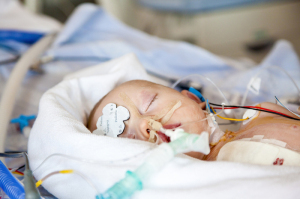 New guidelines educate physicians
on treating these patients
Long-term academic performance may take a hit from anesthesia and surgery before age 4, according to a recent study.

But the impact is slight and "the overall difference was markedly less than the differences associated with sex, maternal educational level, or month of birth during the same year," according to researchers headed by Dr. Pia Glatz, who is with the Section for Anesthesiology and Intensive Care Medicine, Department of Physiology and Pharmacology, Karolinska Institutet, Stockholm, Sweden, and the Department of Anesthesiology and Intensive Care Medicine, Kalmar County Hospital, Kalmar, Sweden.

The study was published in JAMA Pediatrics.

Calling the association of anesthesia and surgery "small", with later academic performance or cognitive performance in adolescence on a population level, Glatz stated that, "while more vulnerable subgroups of children may exist, the low overall difference in academic performance after childhood exposure to surgery is reassuring," noting that, "these findings should be interpreted in light of potential adverse effects of postponing surgery."

A single exposure was associated with a mean difference of 0.41 percent in lower school and .97 percent in IQ tests.

"While retrospective investigations have failed to identify an association with later academic performance after one exposure to anesthesia and surgery, multiple exposures are consistently associated with an increased risk for learning or cognitive disabilities," the researchers stated, suggesting that "reasons for these divergent results have been proposed, including confounding by indication and the effect of comorbidities driven by the underlying disorder."

These findings highlight the complex nature of decisions concerning surgery and anesthesia in a pediatric setting.

Earlier this month, for example, new guidance was issued by the Society for Cardiovascular Angiography and Interventions (SCAI), the Society for Pediatric Anesthesia (SPA) and the Congenital Cardiac Anesthesia Society (CCAS), concerning sedation in young congenital heart disease surgery patients.

"Practices regarding the way sedation is administered are highly variable across U.S. hospital systems and institutions," HCB News reported that lead author Dr. Robert Vincent, pediatric cardiologist at Children's Healthcare of Atlanta, said about the guidance.

The paper, "SCAI/CCAS/SPA Expert Consensus Statement for Anesthesia and Sedation Practice: Recommendations for Patients Undergoing Diagnostic and Therapeutic Procedures in the Pediatric and Congenital Cardiac Catheterization Laboratory," was published in Catheterization and Cardiovascular Interventions, the official journal of SCAI.

"We developed these recommendations to alert and educate physicians and hospital administrators to the complex and dynamic challenges they may face when treating pediatric patients with congenital heart disease," said Vincent.