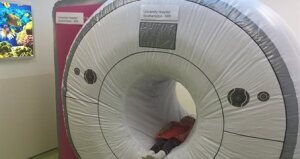 The process of getting an MR can be hard on adults – and even rougher on children.

Southampton’s university hospitals have created an inflatable model of the machine to help the youngest patients let go of their fears of the big machines.

“The inflatable MR scanner will obviously be a popular attraction as it is a fun and innovative addition to our educational materials, but it will also give us the chance to highlight the important part it can play in reducing patients’ fears and, in turn, the use of anesthetics and waiting times,” said Helen Haigh, acting lead superintendent radiographer for cross sectional imaging at University Hospital Southampton NHS Foundation Trust.

This MR replica is part of the overall effort to help health care providers deal with the difficulties and risks associated with pediatric patients, which have led hospitals to consider alternatives to anesthesia to ensure children stay still during MR imaging.

Researcher Delaney McGuirt a radiologic technologist from the University of North Carolina Biomedical Research Imaging Center, reviewed dozens of studies published over the past decade that referenced alternatives to sedation or general anesthesia for pediatric MR exams, which come with risks, such as respiratory depression from over-sedation.

“There isn’t much 'best practice,'” McGuirt told HCB News in October. “So, I felt it was important to put it out there for hospitals to read and consider … Most hospitals and larger facilities just default to sedation. They don’t necessarily have time to think of alternatives.”

McGuirt found that the most effective alternatives, which provided the most cost savings, include using a full-scale replica of an MR scanner, such as the one now displayed at Southampton.

One study McGuirt reviewed, conducted by the Royal Children’s Hospital in Australia, found that using the mock training resulted in a reduction of 8.6 percent in general anesthesia rates and an annual net savings of $117,870 when compared to the cost of general anesthesia. After 102 children had a mock session, 98 percent of their exams resulted in obtaining diagnostic quality images, the review noted.