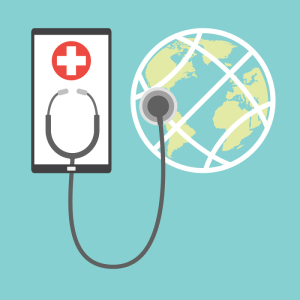 For patients who may benefit from a quick consult with a doctor to discuss symptoms not severe enough to warrant a visit to the ER, telehealth via smartphones or tablets could represent a major tectonic shift in the delivery of care.

And it’s growing by leaps and bounds, according to spokespeople at Avera Health Plans, a multi-state health system based in Sioux Falls, S.D., and American Well, a company offering telemedicine services.

The two companies offered a webinar recently for physicians and others in health care titled “Avera’s Guide to Physician Engagement in Telehealth.”

According to a survey done by the Harris Poll on behalf of American Well, 64 percent of Americans are willing to have a video visit with a doctor. Plus, the interest in telehealth spans all ages with even 41 percent of those 65 and older wanting the opportunity to try it.

“There are so many things in life you can do in the palm of your hand – for instance, buy groceries,” said Dr. Jason Knutson, lead physician for AveraNow. “About five or six years ago, one of the things we wanted to increase was market share, and be on the cutting edge of how medicine was delivered.”

Avera’s leaders interviewed many telehealth companies, but it didn’t make financial sense then.

“We were all primary care physicians and being paid more to see patients in the office rather than over the phone or internet. We continued to do a lot of research,” he said.

And then, one-and-a-half years ago, the company decided to dive into telehealth and it continues educating and training physicians throughout their system on what the program is all about, and how it can help them and their patients.

Avera has hired four nurse practitioners and physician assistants to cover the telehealth platform during the day. Then American Well covers any calls that come in overnight.

“My father is a rancher in South Dakota and is two hours away from his rheumatologist. I can imagine him just calling up his doctor instead of driving all the way there and then all the way back home. That will be immense for people like him,” Knutson said.

The service also keeps health care costs down. For instance, someone can dial in to their doctor for a bad cough instead of going to an emergency room, where the expense can be much higher.

“On the phone, it’s hard to tell how sick someone really is,” Knutson said. “When you see them and you can see their mental status and whether they are listless.”

With video access, the patient is there to help the doctor piece together the symptoms. Let them walk you through their situation, he said. They can push in certain places on their body.

“It’s something we really believe will be weaved into normal health care,” said Dr. Peter Antall, chief medical officer for American Well. “For instance, does a child with pink eye really need to come into the doctor’s office? No, not really. With telehealth, a doctor can do a quick check.”

He said telehealth can be a great addition to schools, businesses and home care.

“In the end, we have a new tool. It helps us to express our skills in new ways, and we are seeing it emerge. The sky is the limit,” he added.