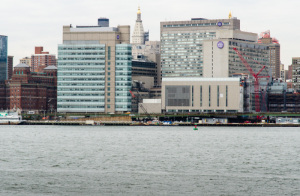 NYU Langone as seen from
East River via Wikimedia Commons
NYU Langone Medical Center and Winthrop-University Hospital announced Wednesday afternoon the signing of a non-binding letter of intent that aims to "bring together" the two metropolitan New York medical centers. They said negotiations toward signing a definitive agreement will come underway, as will the pursuit of regulatory approvals.

"NYU Langone is committed to creating mutually beneficial partnerships with leading health care providers, and we are excited for the opportunity to bring together two great medical centers to better serve our patients in the neighborhoods where they live and work," said Dr. Robert I. Grossman, dean and CEO of NYU Langone.

The main hospital campus for NYU Langone is on the East side of Manhattan, but the academic medical center also has over 175 ambulatory sites throughout the region and more than 40 practices in Queens and Long Island. The institution comprises five hospitals and also includes the NYU School of Medicine.

Winthrop-University Hospital is based in Long Island and contains a CyberKnife Center. The hospital also has multiple ambulatory sites in the area, a CyberKnife facility in Manhattan, and a fully renovated 7,500-square-foot trauma center in Nassau County.

"This first step represents a momentous milestone for Winthrop," said John Collins, president and CEO of Winthrop, in the announcement. "As Long Island's first community hospital, we have grown into a major academic medical center, and with our services in such demand, it became obvious that we needed to expand further, physically and geographically."

According to an April report by The Island Now, Winthrop's interest in partnering with a large hospital system has been known for several months, but hospital officials would only say it was looking at the “three or four large hospital systems in New York City,” and it had ruled out North Shore-Long Island Jewish.

The new partnership will reflect a commitment to the highest standards of clinical care, supported by the most advanced technologies, and integrated with world-class research and teaching programs, according to the statement. It will also enhance the collective abilities of the two entities.

"We have held discussions with a number of major health care systems in the region, and NYU Langone represents the best partner, based on many synergies, including a mutual commitment to improving quality, medical excellence, a complementary geographic presence, and, most importantly, compatibility of our cultures," added Collins.