Mobile C-arms: Is the era of flat panel detectors and 3-D technology upon us? 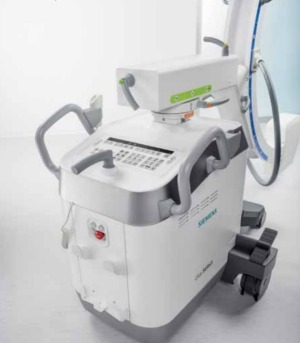 The global fluoroscopy and mobile C-arm market was valued at $1.69 billion in 2012 and is projected to be worth $2.08 billion in 2019, according to a Transparency Market Research report. The growth is mainly being fueled by a rising demand for interventional radiology procedures. The field of interventional radiology is growing predominantly due to the fact that there are new types of minimally-invasive procedures emerging. There has been a transition from open aortic surgery to minimally- invasive surgery as well as a trend toward endovascular cancer care.

GE Healthcare and Philips Healthcare have recently come to market with a plethora of tools for fixed C-arms to assist with those types of procedures. The tools have already been proven to shorten procedure time, reduce the amount of contrast needed and improve sensitivity.

But the biggest trend in the market is flat panel detectors (FPDs) and when they will become the standard for mobile C-arms. Image intensifiers (IIs) are still the mainstream technology, but industry experts believe that will change in the not-so-distant future.

Flat panel or image intensifier?
Ziehm Imaging introduced the first C-arm with a FPD in 2006, and since then many other manufacturers have followed suit. Philips received FDA clearance for its Veradius Unity in November 2014, which is its third generation FPD system, and Siemens Healthcare introduced a new FPD mobile C-arm at last year’s Radiological Society of North America (RSNA) meeting.

Despite the influx of FPD mobile C-arms, IIs still remain the industry standard. The main reason for that is cost — a standard C-arm with a FPD costs between $280,000 and $300,000, and standard systems with an II cost between $120,000 and $170,000, according to MD Buyline. “It mainly depends on [whether] a facility has the money to budget for a flat panel system,” says Jamie Dildy, clinical analyst at MD Buyline. “That would be your bigger hospitals and facilities that are using the C-arm all of the time.”

Another reason that FPDs have not caught on in the marketplace is because the market leader, GE Healthcare, hasn’t introduced a mobile C-arm with the technology yet. GE’s OEC systems are the most popular C-arms on the market, according to MD Buyline. “It’s not that we don’t know this technology well, but because we know it well, we recognize that we did not feel it was the right technology to put on a mobile C-arm in its current state,” says Linda Milano, regional product marketing manager of surgery at GE.

However, GE is currently working on its own FPD technology and will introduce it to the marketplace at some point in the future. Many industry experts believe that once GE introduces its C-arm with an FPD, the industry will start to move away from IIs. Even though FPDs have not gained popularity among the full-size mobile C-arms, they are popular among the mini C-arms used for orthopedic imaging. One reason is that the price of mini C-arms with FPD is significantly less than the price of full-size C-arms with FPD.
1(current)
2
3
4